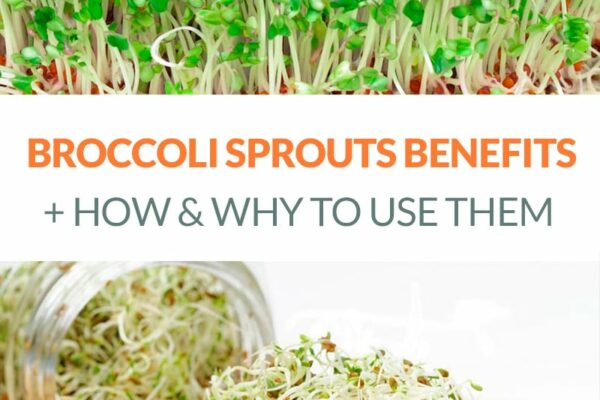 It’s no secret I love superfoods, especially when they’re simple, whole foods. I enjoy sharing my discoveries with you guys by summarising what I learn along the way.

Today, I want to talk about the amazing broccoli sprouts: benefits, nutrition, uses and where to get them (or how to grow yourself). I learnt about broccoli sprouts while listening to a podcast with the very insightful Dr Rhonda Patrick of Found My Fitness. I instantly became intrigued and I think they will become a huge hit in 2019. 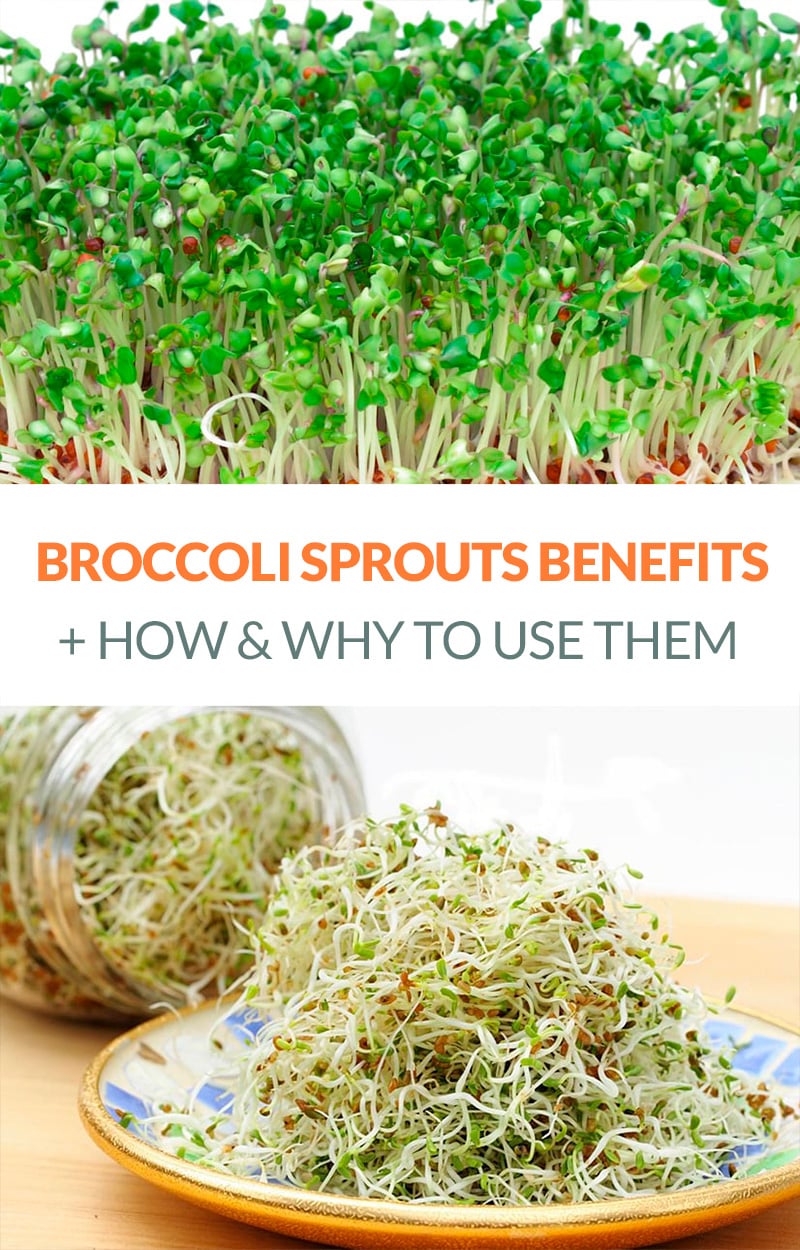 What Are Broccoli Sprouts?

Sprouts of any vegetable are simply its humble beginnings. Before broccoli grows to a full-size head ready to eat, it sprouts up from the seeds. These sprouts look like tiny little plants or seeds with a stem and green leaves protruding from it.

While most veggies – and cruciferous ones, in particular – are great sources of nutrition and powerful disease-fighters, sprouts are known for their extremely high concentration of nutrition. Broccoli sprouts are often talked about in conjunction with sulforaphane, which is a compound we will talk a lot about in this article. 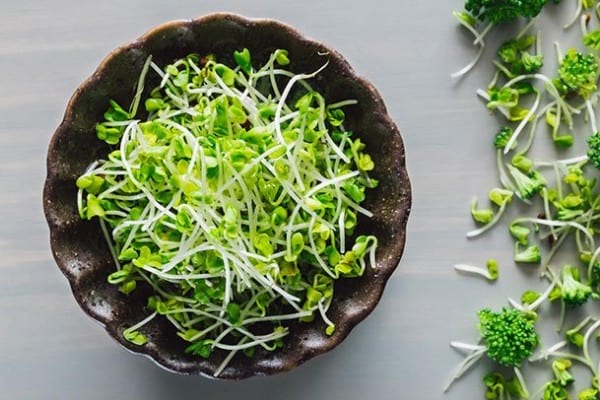 What is in your average 115 g / 4 oz. serving of broccoli sprouts? Spoiler alert: it’s not quite the same as broccoli itself, so don’t be quick to compare. Broccoli boasts impressive amounts of vitamin A and vitamin K, which you won’t find here. Still, this tiny sprout picks up the slack in other places – trust me!

For so few calories, you really get a load of important vitamins with these guys. However, that’s not what makes broccoli sprouts stand out…listen up!

Sulforaphane is a phytonutrient (plant nutrient) that belongs to a group of phytochemicals called isothiocyanates. As a compound, sulforaphane is typically found in cruciferous vegetables including cauliflower, brussels sprouts, cabbage, radish, bok choy, and you guessed it – broccoli! This green veggie is the best source of the stuff out there, even in comparison to all other cruciferous veggies.

Moreover, having too much raw cruciferous plant matter can cause digestive issues and an upset tummy pretty quickly. This makes broccoli sprouts an unparalleled source of sulforaphane in the world of nutrition because they are much easier to digest raw.

So, now we know it’s a compound, but what does that entail? Let’s dive a little deeper into the benefits. First, we begin with glucoraphanin. We’re gonna get a little geeky for a minute.

You’ll find a good amount of this stuff in the sprouts of both cauliflower and broccoli. When broken down by chewing, chopping, blending or otherwise processing, you will unlock the key to sulforaphane production. The enzyme that those processes produce – myrosinase – will turn glucoraphanin into sulforaphane.

Here, we run into our next big concept: isothiocyanates. The metabolites formed through compounds known as glucosinolates through enzyme myrosinase (which we got to know above), these compounds are also activated when plant tissue is processed. This is exactly what makes sprouts superior to the fruit: it becomes inactive when consistently exposed to heat (e.g. when boiling the vegetable). Voila! It’s sprout witchcraft (or science, really). Your body is really good at that.

It is essentially the most powerful activator of Nrf2, regulating over 200 different genes by acting on antioxidant response elements. It also does a great job at increasing cellular glutathione – an antioxidant – in the body. Some of these genes can reduce the effects of harmful compounds in the body. These are exactly what make this compound a potent anti-cancer food. 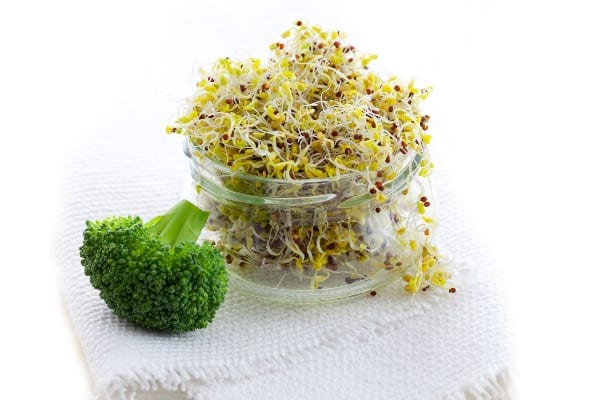 Broccoli sprouts (and consumption of lightly cooked cruciferous veggies) a few times a week are tied to lowering LDL (“bad”) cholesterol, reducing the risk of cancer, and increasing longevity. Sulforaphane is also considered a nootropic which can be traced to its ability to cross the blood-brain barrier.

Nootropics are considered natural brain-boosting compounds, and this might be a reason why it’s good for folks who are on the autism spectrum, or why it’s believed to reduce the risk of neurodegenerative disease. Let’s delve further into the details.

First, it’s most notoriously known as a mighty protector against several types of cancer including breast, prostate, lung, skin, and stomach cancers. Many sources of research, including this study, claim that 3-5 servings of cruciferous veggies per week effectively reduces cancer risk by 30-40 per cent! This is due to the ability isothiocyanates have to deactivate phase I biotransformation enzymes which essentially inhibits the conversion of benign carcinogens into active ones.

It is also known to slow the rate of development in cancer markers such as tumour growth. If they’re deactivating, they must be activating something else, right?

They are also known to activate phase II detoxification enzymes which are mediated by the Nrf2 pathway. This is where deactivation of carcinogenic agents happens when the transcription of the gene is altered. Those agents – such as known carcinogen benzene from car exhaust fumes and cigarette smoke – take on the ability to become water-soluble which means that they can be more easily excreted from the body.

According to this study, this amazing compound also includes chemopreventive properties which reduce the negative effects of chemotherapy during cancer treatment without negatively impacting healthy cells.

This study – which focuses on the impact of sulforaphane’s interactions in people with Autism Spectrum Disorder – claims it “upregulates genes that protect aerobic cells against oxidative stress, inflammation, and DNA-damage.”

These protective abilities may reverse abnormalities with ASD in addition to other diseases from autoimmune diseases to cancer. This is because most disease begins at the cellular level such as cancer, and due to inflammation often being a factor. For example, sulforaphane can prevent DNA adducts which is a type of damage often associated with cancer development. This also might be promising for individuals with type 2 diabetes, as oxidative stress is a significant component of complications and symptoms.

Finally, sulforaphane reduces the risk of respiratory issues, ocular disease, and heart disease. In fact, folks who are in the upper ranks for cruciferous veggie consumption reduce all-cause mortality rates significantly, which can likely be traced to its ability to combat cardiovascular disease.

These benefits can be attributed to their antioxidant content, reducing the effects of free radical damage. Ultimately, this comes down to the cells receiving a big boost of antioxidant capacity which is exactly what all those protective abilities are attributed to.

That was quite the mouthful! Those points really helped to conclude why this compound is such a powerful disease-fighter, but here are a few more reasons why you should have some sprouts in case you’re not convinced yet.

Image from Juicing For Health

You can find more details on how to grow broccoli sprouts on Wellness Mama.

If you’re looking to learn more, I highly recommend watching  ‘Sulforaphane and Its Effects on Cancer, Mortality, Aging, Brain and Behavior, Heart Disease & More’ from Dr Rhonda Patrick who can lead you to further studies and help clarify the scientific terms used in this article.

How to eat broccoli sprouts 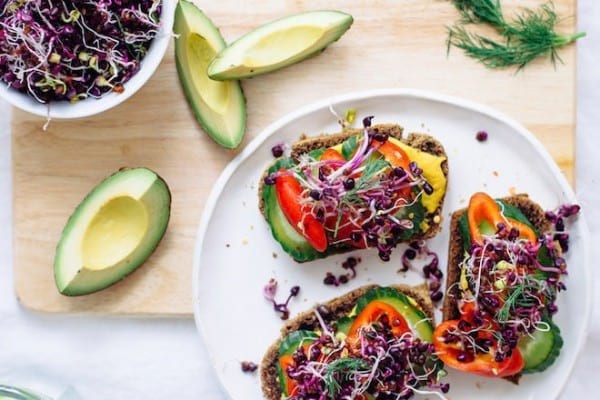 This superfood is so easy to eat and add more of into your diet, which is a big part of the reason I wanted to highlight the broccoli sprouts benefits in this article for you guys.

Remember – part of the process that makes them such a potent powerhouse of nutrition is the chewing, blending or chopping process that transforms enzymes within the plant. Therefore, these are my top consumption recommendations:

If you don’t quite love sprouts in any of these recipes, try adding some ground mustard seed powder to lightly steamed broccoli. This method increases the bioavailability of sulforaphane because it activates the same enzyme reactions that make sprouts so powerful in the first place. Thanks, Dr Patrick for the tip!

All in all, it’s important to note that receiving your sulforaphane through real food versus a supplement will ensure your body can actually use it and reap the benefits.

Where to buy broccoli sprouts

Broccoli sprouts can often be found at health food stores amongst the other produce. You will find many other sprouts there as well – most notably, alfalfa sprouts or pea shoots. All of these sprouts have an array of awesome benefits, so perhaps you can pick up a few different varieties. Check out your local food co-op for a good selection, farmer’s markets for a local selection. Your big-box grocery may also be carrying them.

How to grow broccoli sprouts at home 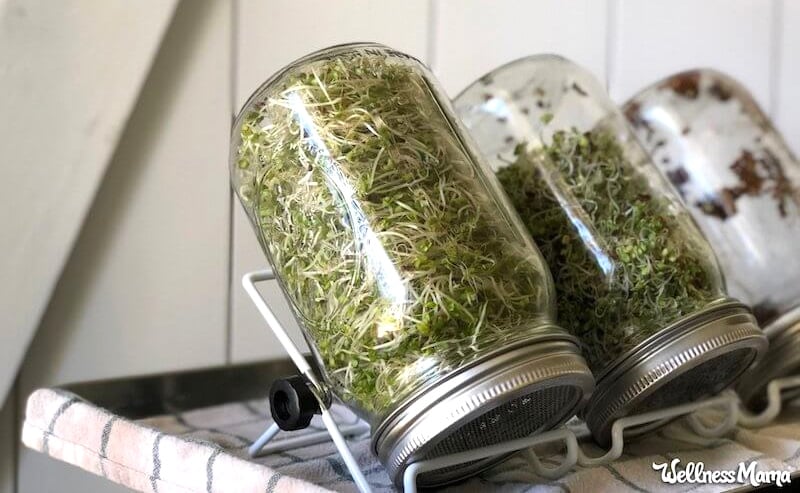 Check out more info on how to grow broccoli sprouts at Wellness Mama.

Whether you simply can’t locate broccoli sprouts in-store, or you’re looking to cut down your grocery budget, growing your own broccoli sprouts is a fantastic option. You don’t need a green thumb to get an abundance of sprouts growing at home for easy and fresh consumption. It’s quite simple to get started on this endeavour with a few simple ingredients and tools.

I hope you enjoyed this article on broccoli sprouts. Let me know in the comments if you consume them, sprout yourself or considering to do so.