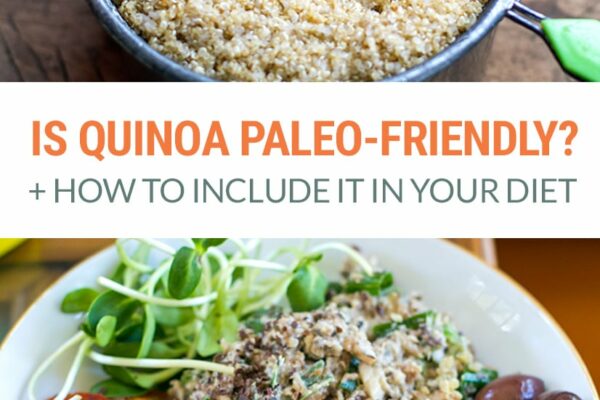 Ever wonder if quinoa is paleo-friendly? In this article, I discuss the nutritional benefits of quinoa, as well as the pros and cons of including it in your diet (especially if you’re following the paleo framework). 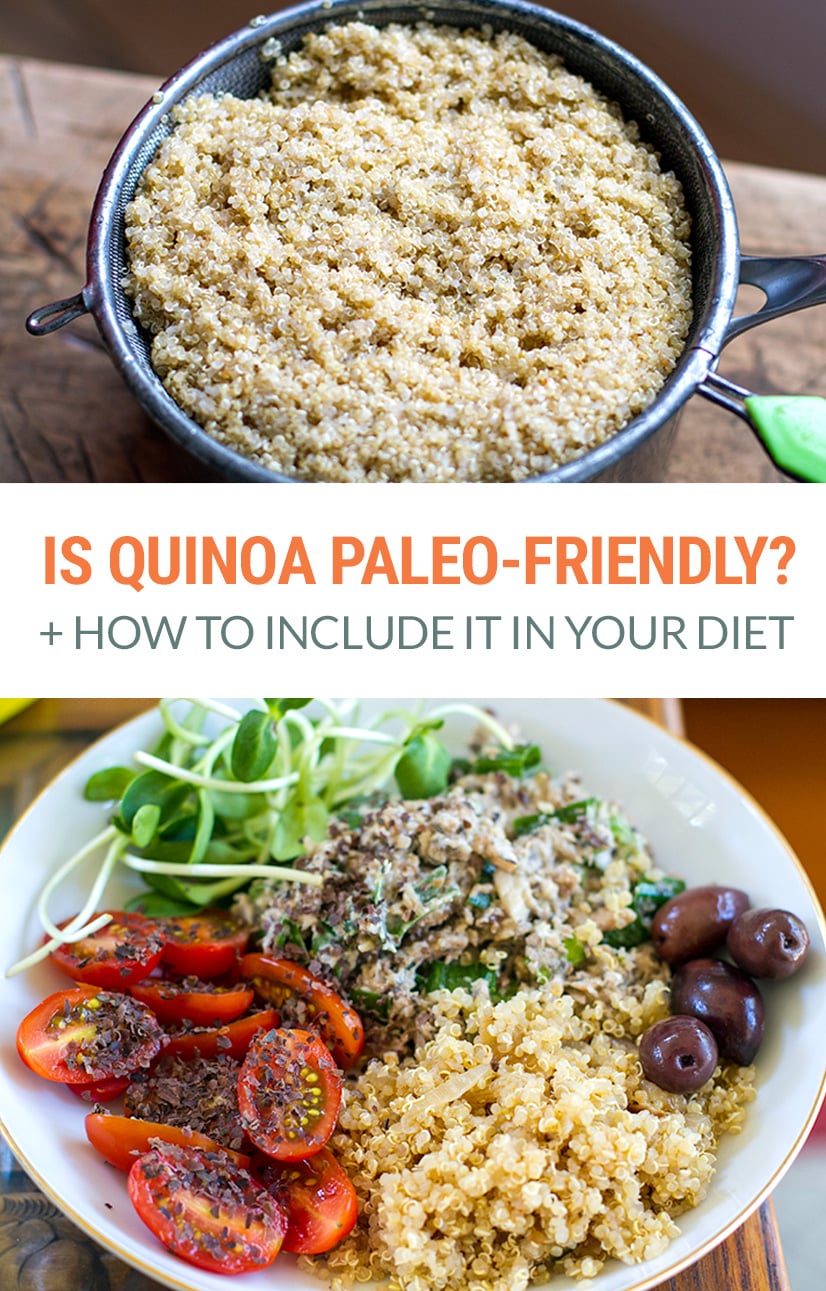 Hailed as a superfood, quinoa is gluten-free, high in protein and nutrient dense. All valid reasons as to why it has become a popular alternative to traditional grains. In fact, the United Nations declared 2013 the International Year of Quinoa, “to raise awareness of the nutritional, economic, environmental and cultural value of a food that has been traditionally cultivated for thousands of years.” But is quinoa all it’s cracked up to be? Let’s take a closer look to find some answers. 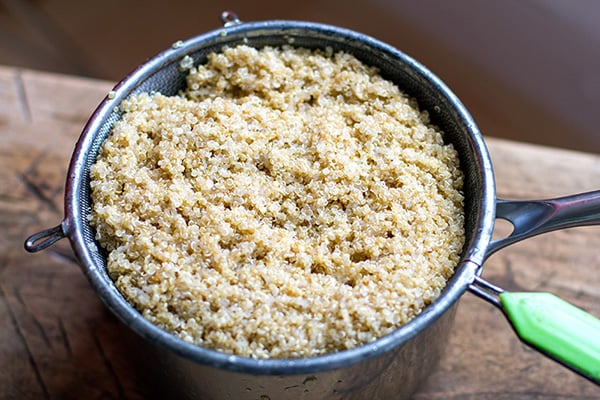 Quinoa is a flowering plant native to the Andes in South America. The crop is grown primarily for its small bead-like seeds that are commercially available in white, red and black. When cooked, the tiny round seeds resemble couscous. The seed is also processed into flakes and flour.

You’ve probably heard quinoa described as a ‘pseudograin’ (or ‘pseudocereal’). This term is given to plants that are used in the same way as grains (like wheat, rice and oats) but are from a different botanical family. Amaranth, buckwheat, chia, and quinoa are all pseudograins. Quinoa is a species of goosefoot (Chenopodium) and it’s closest relatives are beets, spinach and chard.

Is it paleo if it’s not a grain?

On a paleo diet, grains are avoided because they contain gluten and anti-nutrients (such as phytic acid and lectins) which irritate the digestive system; they are also high in carbohydrates and a poor source of nutrients compared to other food like vegetables and animal fats and protein; and finally, they are often heavily processed. You can read more about why grains aren’t your friends here.

Like a seed, quinoa is gluten-free, a complete protein (contains all essential amino acids) and nutrient-dense. However, it does contain some of the same properties as grains which are potentially harmful, including anti-nutrients and high carbohydrate content (53 on the Glycemic Index). Even though the seed is gluten-free, many people find quinoa hard to process and digest. This is because of the presence of anti-nutrients such as lectins, saponins, protease inhibitors, and phytic acid.

Plants produce saponins, lectins, and protease inhibitors as a defence mechanism – basically to stop their seeds being eaten and to protect against mould and fungus. When ingested, these chemical compounds irritate the digestive tract causing discomfort, and the predator learns not to eat it again. These compounds are present in varying levels in pseudograins.

Quinoa contains saponins,  another compound designed to protect the seed. The highest concentration of saponins is found in the outer casing of the seed, which is waxy and bitter tasting. Interestingly, when hulled and milled into flour the saponin content is halved, according to this study. The total saponin content of whole quinoa seed is still much lower than that found in soybean or chickpeas (like 3-5 times lower).

Lectins are proteins present in many foods, and only certain types are toxic – like gluten. However, those found in pseudograins also cause negative reactions in many people.

Protease inhibitors prevent the digestive enzymes from breaking down the seed – so the seed can pass through the digestive tract and emerge whole, able to germinate. Over-consumption of foods containing protease inhibitors can damage the pancreas. Once again, according to this study into the nutrient and antinutrient content of quinoa seed, the level of these inhibitors diminishes significantly with dehulling and milling of the quinoa seed into flour. Quinoa pancakes anyone?

Phytic acid is found in grains, nuts, seeds and beans. Phytic acid binds minerals and prevents us from absorbing them. A high phytate diet can result in mineral deficiencies which cause diseases such as osteoporosis and rickets. However, phytic acid can be reduced by sprouting or soaking before cooking. 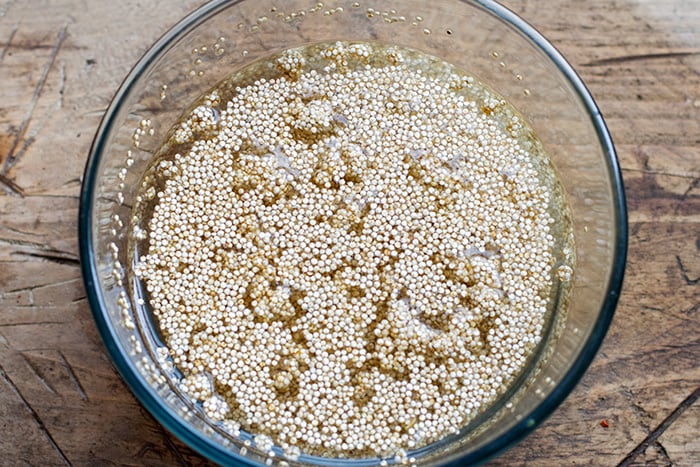 These anti-nutrients can all contribute to leaky gut, cause inflammation, weaken the immune system, and trigger autoimmune disease. To reduce the impact of these anti-nutrients, it is essential to prepare quinoa by soaking, ‘polishing’ and rinsing the seeds before cooking (more on this below).

For a detailed rundown of the anti-nutrients found in pseudograins, see:
Weston A Price: ‘Preparing Grains, Nuts, Seeds and Beans for Maximum Nutrition’
‘Less bad but not good: pseudograins and non-gluten grains’

So, is quinoa good or bad?

Yes and no… Quinoa is not strictly paleo but many people, including me, eat it occasionally for variety. However, I would avoid it if I had any gut problems, an autoimmune condition, or I was trying to reduce my carb intake for weight loss or to correct a metabolic disorder. Why not try swapping it for nutrient-dense sides like cauliflower ‘couscous’, sweet potato or squash instead?

How to prepare quinoa 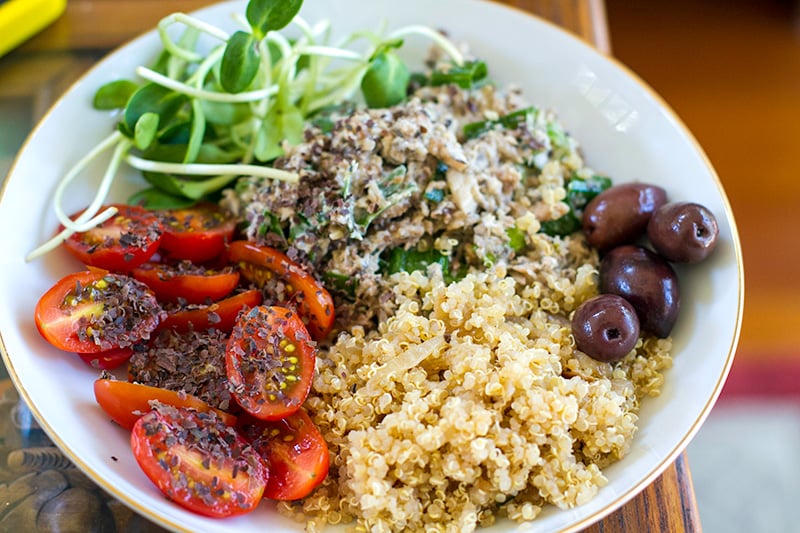 Quinoa is cooked much like rice, however, it should be prepared carefully to remove some of the anti-nutrients to minimise the impact on your gut.

1. Soak 1 cup quinoa in salted water for 6-8 hours (this reduces the phytic acid)
2. Place the quinoa in a fine-mesh strainer and rub the seeds together with your fingers while rinsing under cold running water (this ‘polishing’ removes the coating of saponins)
3. In a pot, combine the quinoa with 1.5 cups of water with a pinch of salt (or stock)
4. Bring to the boil and then reduce to low temperature and simmer (lid on) for 10-15 minutes until the water has been absorbed and the seeds become almost translucent
5. Rest for 5 minutes and fluff with a fork before serving.

CHECK OUT MY GLUTEN-FREE QUINOA RECIPES

You might also be interested to read my posts on the paleo diet and buckwheat, green peas, white rice, amaranth, oatmeal, and miso.

What are your thoughts on quinoa? Do you include it in your diet? Share your comments below.