My new Paleo Breakfast Cookbook is out with 85+ nutritious recipes to start the day! 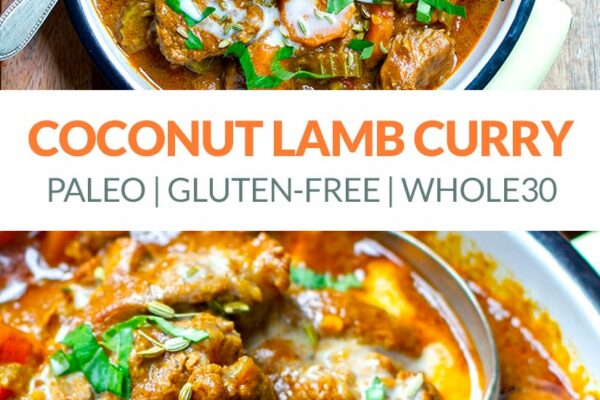 This hearty paleo lamb curry is a bit of fusion but is primarily Indian in flavour. It’s very easy to make and can be done in a slow-cooker and frozen. Serve with cauliflower rice! 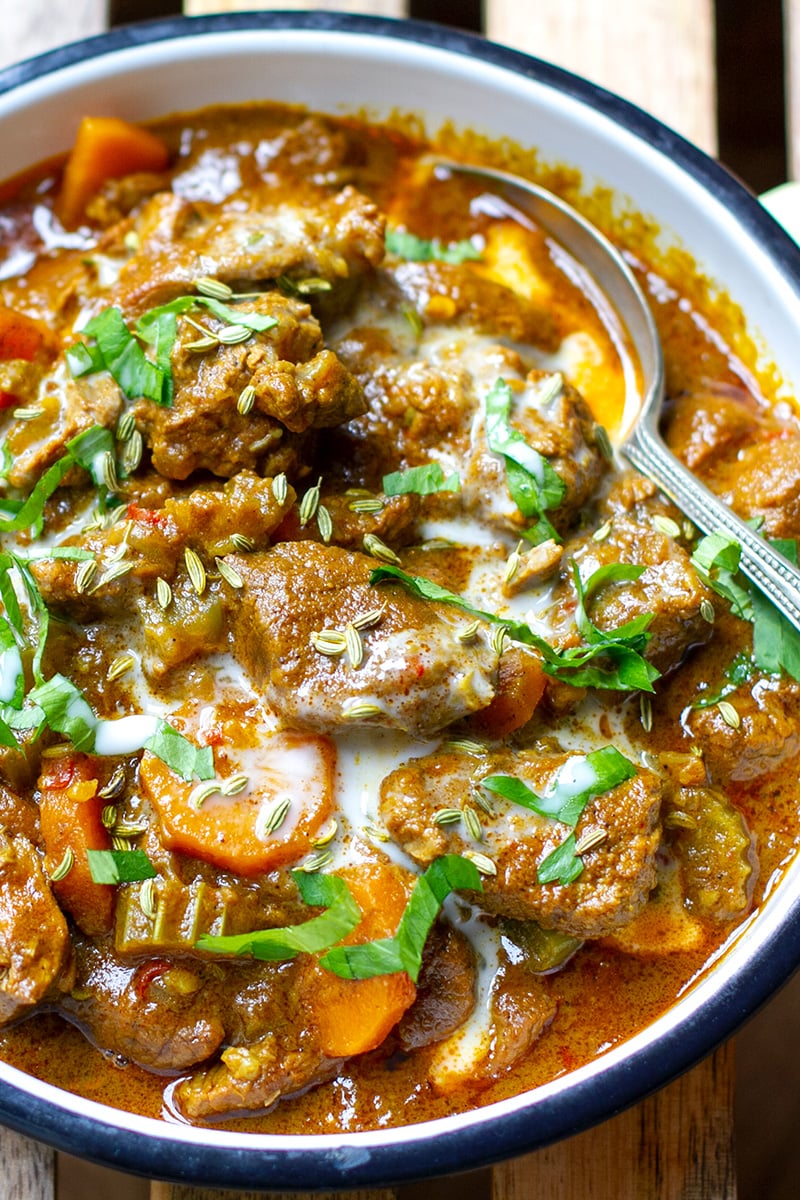 This gorgeous lamb curry was an experiment that went very very right. I bought some diced lamb and decided to make an Indian type of curry, except I didn’t have a recipe in mind. I pulled out my spice kit, some coconut milk and pulled together this little wonder of a dish. It was super scrummy and has now been requested to become a regular weekly dish in our home. I hope you like it!

For this yummy coconut curry, I am using diced lamb meat (with a little fat) from the shoulder but you could also get the leg or other parts. I find that the shoulder and leg of lamb meat is less tender but more flavourful and is great for slow cooking and stews.

Garam masala is a warm, earthy Indian spice blend that typically consists of coriander seed, cumin, black pepper, nutmeg, cardamom, clove, fennel and bay leaves. Sometimes, it will have cinnamon or caraway seeds. You can get it from most supermarkets, Indian stores, or make your own. By the way, it’s not too spicy but you can remove the red chilli to make it even less spicy if cooking for the kids.

I used full-fat coconut milk from a can (look for 50-60% coconut content) and not coconut milk drink!!! Those are diluted and are too thin and often sweetened.

If you’re feeling a little lethargic lately, you need this curry!!! It’s full of B Vitamins (especially B12 we need for energy), iron and other minerals. It’s low in carbohydrates (17 grams with 4-5 grams in dietary fibre) and high in fat and protein (35 grams), making it a satiating meal and great fuel post-workout or when you’re sick. All-in-all, this is what I like to call a nutrient-dense dish, so definitely put it on your menu. Full macros and micronutrients can be found below the recipe.

HOW TO MAKE COCONUT LAMB CURRY

I have provided both the stovetop and the slow cooker methods in the recipe below. The key is to give this curry enough cooking time for the meat to get nice and tender and for all the flavours to develop together.

This curry freezes really well and serves for excellent quick leftover dinners (defrost overnight in the fridge or use a microwave) or you can keep it in the refrigerator for up to 3 days and reheat really well when serving. 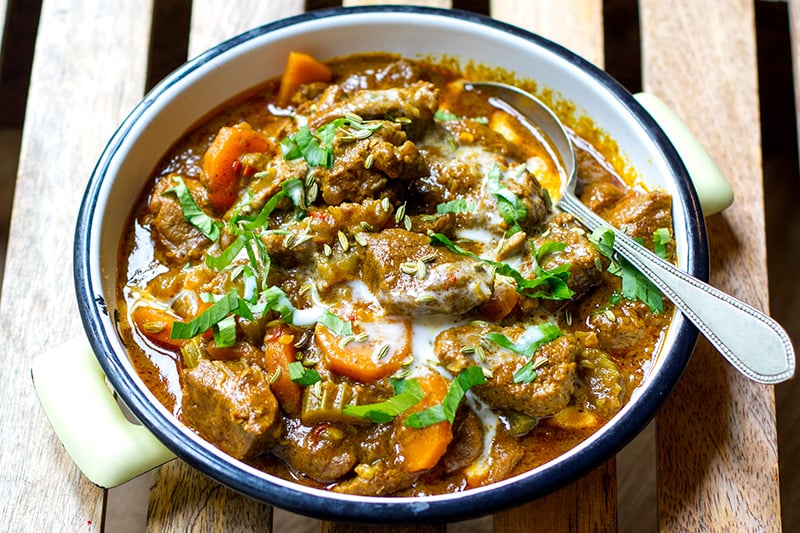 WHAT TO SERVE WITH THIS CURRY

I served this particular coconut lamb curry with steamed broccoli for me and white rice and veggies for my partner. Sometimes, I serve it with simple cauliflower rice or zucchini noodles.

For a high-carb meal, you could also serve it with regular rice (I like Basmati as it has a lower GI) or with quinoa.

This is a very hearty, warming lamb curry that is perfect with cauliflower rice or regular rice if you eat it. You can use beef, goat or chicken thigh meat instead of beef.

Heat a tablespoon of coconut oil in a casserole pot or a large saucepan. Add the lamb and stir on high heat until lightly browned, about 3-4 minutes.

Add the onion, chilli and celery and cook for about a minute, until slightly softened. Bring the heat down to medium. Add garlic, garam masala, turmeric, fennel seeds and ghee (or extra coconut oil if avoiding dairy). Stir through the lamb and cook for a minute to let the spices release their aromas.

Add coconut milk, tomato paste, water and sea salt. Stir and bring to boil. Then turn the heat down to simmer and cook for 1 hour, covered with a lid. Stir a couple of times.

After one hour, add the diced carrot and cook for a further 30-40 minutes, covered with a lid. Stir a few times.
Sprinkle some fresh coriander or parsley and drizzle a little lemon or lime juice before serving.

Serve with your favourite vegetables or cauliflower rice, or real white rice if your heart so desires.

If your inner pot is metal and heat-proof (i.e. not ceramic), you can do the first few steps on the stove first. It’s pretty easy and you will only need 5 minutes for this. You basically want to brown off everything before setting the slow cooker on. Otherwise, if it is a ceramic crockpot, then do the first few steps in a saucepan first and then transfer the mix to the slow cooker pot. Cover with a lid and set the slow cooker to 8-9 hours on LOW, 5-6 hours on MEDIUM, 3.5-4 hours on HIGH. If adding carrots later, do it in the last 30 minutes to 1 hour (depending on the heat setting).

Once done, sprinkle some fresh coriander/cilantro or parsley and drizzle a little lemon or lime juice before serving. Serve with your favourite vegetables or cauliflower rice, or real white rice if your heart so desires. 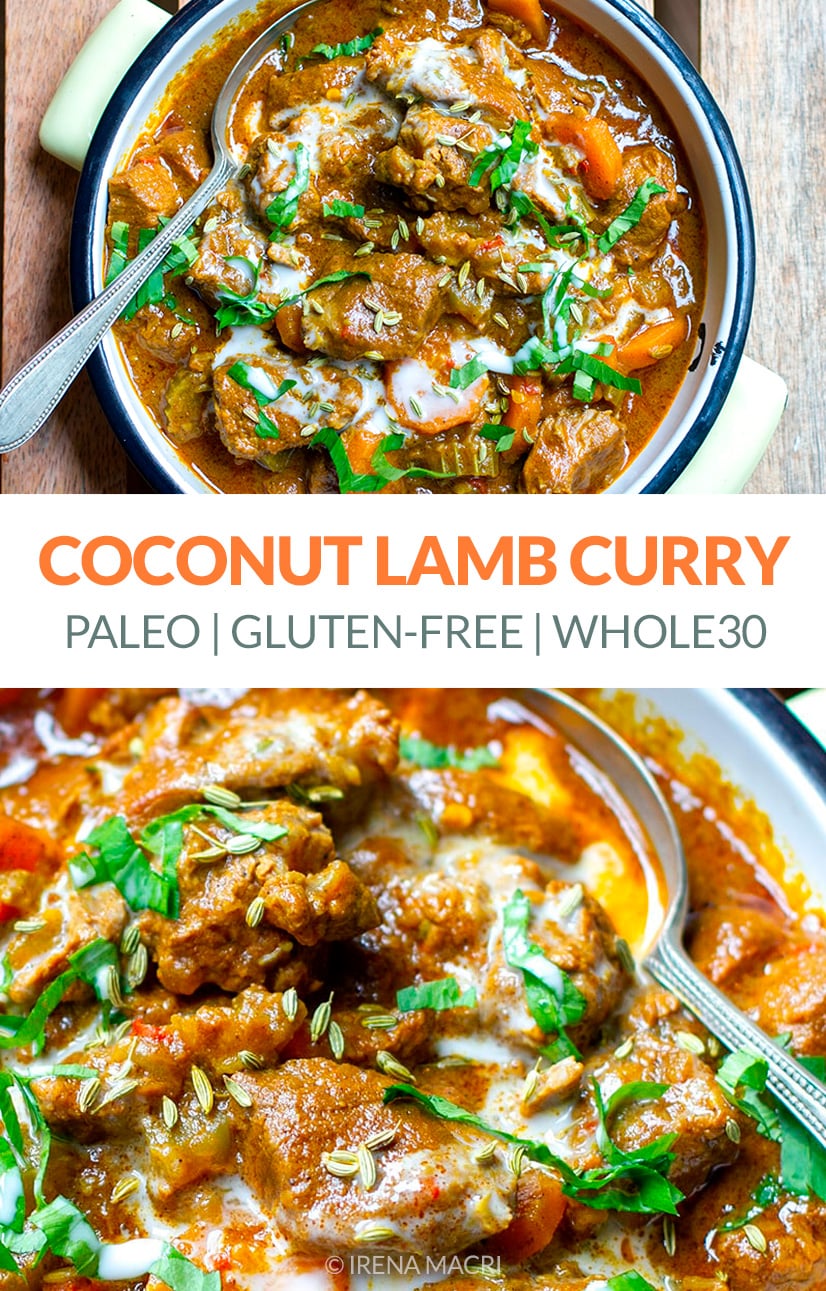 About me: I share nutritious recipes focusing on vegetables, paleo and gluten-free diets. I create cookbooks and meal plans to help you get healthier and lose weight. I’m currently finishing an advanced diploma in Nutrition & Weight Management. More about me here.