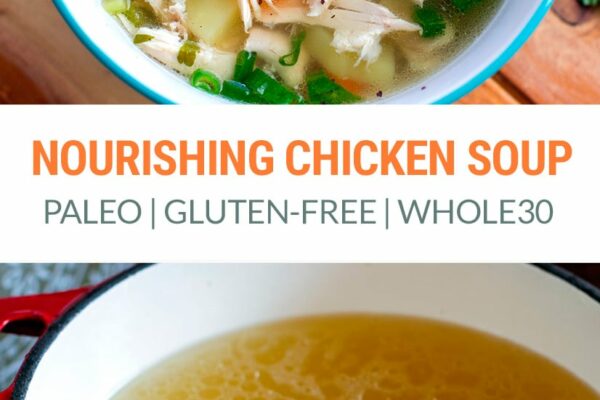 This fall off the bone, nourishing chicken soup recipe is one of my go-to dishes when I’m feeling under the weather or I want something comforting and warm. Tender chicken, nutritious veggies and hearty broth are magical together. This soup is paleo, gluten-free, Whole30 friendly. 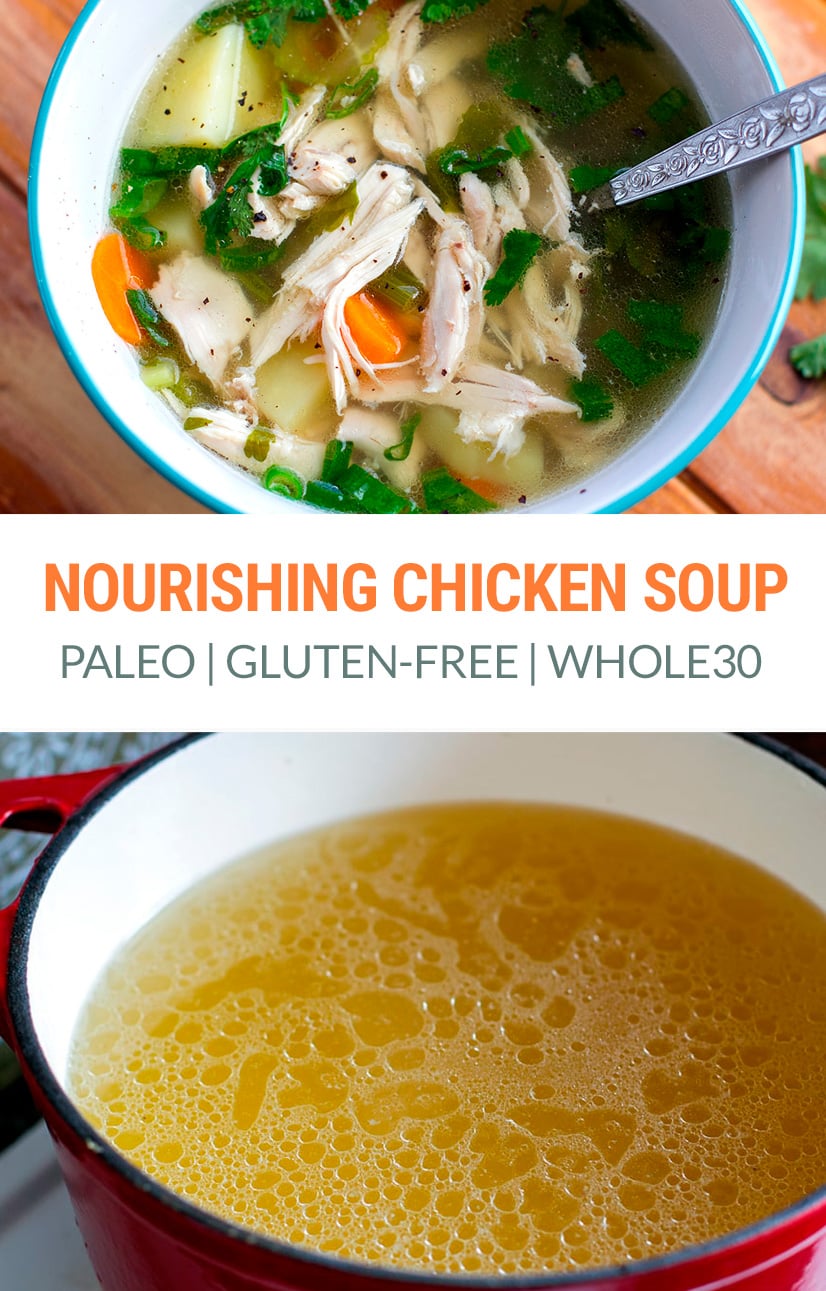 Feeling under the weather? Maybe a little cold? Or just need something simple and light? You can’t go past a good, homemade chicken soup. It’s one of the most comforting dishes with a good balance of nutrients. It’s easy to make, although it does need some time.

Everyone has their own chicken soup recipe, passed on to them by their mothers or learnt from their favourite celebrity chefs. This is my go-to version. The meat is the star of the dish: it’s super soft, falling off the bone when you lift the chicken from the broth and infused with yummy flavours. Of course, you MUST get a good quality chicken to make a tasty soup so make sure to buy the free-range whole bird and organic if possible.

If you can’t get a whole chicken, you can use a selection of chicken pieces but make sure they are on the bone with some fat on. Otherwise, you’ll end up with a thin soup that has no depth to it.

If you’re avoiding white potatoes, feel free to add other vegetables such as broccoli, cauliflower or some Asian greens. I always mix it up depending on the season.

Firstly, cut your chicken into 4 pieces. Use the kitchen scissors to cut through one side of the spine and along the breast bone on the other side. Cut off the thighs from each half and you will have quarters. Place the chicken in a large pot and cover with two litres of cold water. Place on the stove and turn the heat to high.

While the water is coming to boil you can prepare the rest of ingredients. What I do next is add the bay leaves, garlic and peppercorns to the chicken stock. I then cut one of the celery sticks and one of the carrots into 3-4 pieces and add to the stock along with the white onion. I tear coriander leaves off the stems and save those for later; I add the stems as well as a few fresh leaves to the stock. The rest of the vegetables will be added in the second part of cooking. That’s it!

Bring it to boil, then bring the heat down to a low simmer and cover with a lid. Every now and then you can skim off the foam but we are going to strain the liquid so don’t worry too much about it. Cook for 1 hour 30 minutes. Make sure it doesn’t boil or cook on high heat, low and steady is a secret to super soft chicken. 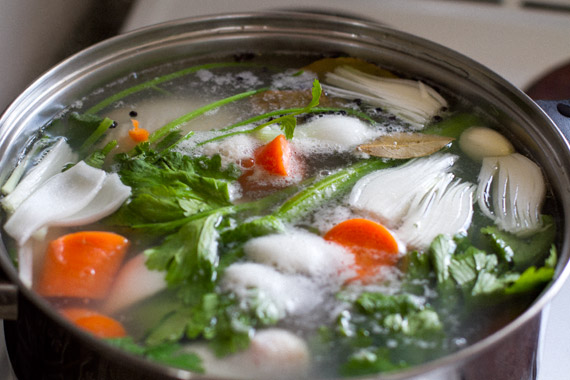 While the stock is cooking, prepare the rest of the vegetables. Peel and cube the potato, slice the second half of celery and carrots and wash the coriander leaves.

By this stage, the smell of the chicken soup would have filled your house and you’re now ready for phase number two. Remove the chicken pieces to a bowl or a chopping board and let them cool down so we can work with the meat. Strain the rest of the liquid into another pot. You can use some of the cooked veggies but I like to discard those and use freshly chopped ones for some crunch. 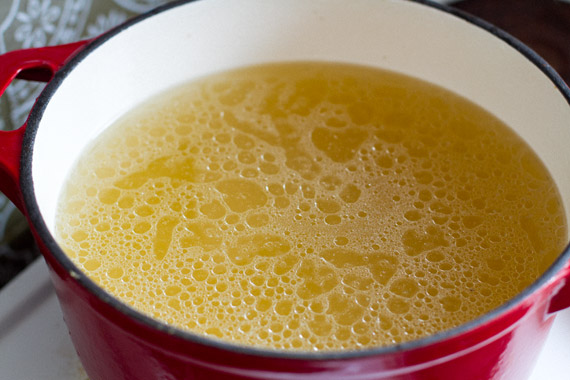 You can reserve some to the stock for later. Cool it down and freeze in ice-cube trays. Don’t be afraid of the fat in the stock, it’s the best part!

Add the salt, potato, celery and carrot to the strained stock. Bring to boil, then turn down to low simmering and cook for 10-15 minutes or until the potato is soft to bite. While cooking, remove the chicken skin and separate the meat. Tear the meat into thin strips and return to the soup at the end.

Turn the heat off, throw in a handful of coriander leaves and some diced green onion and cover with a lid to set for a few minutes before serving. Drizzle with a little lemon or lime juice if you like, and add some chilli for an extra kick. 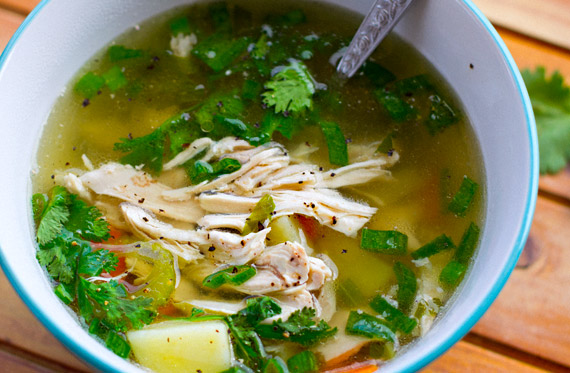 PS. You don’t have to add all of the cooked chicken meat back to the soup, I usually reserve some of it for lunch the next day. The bones and carcass can be cooked again into a broth in a slow cooker. 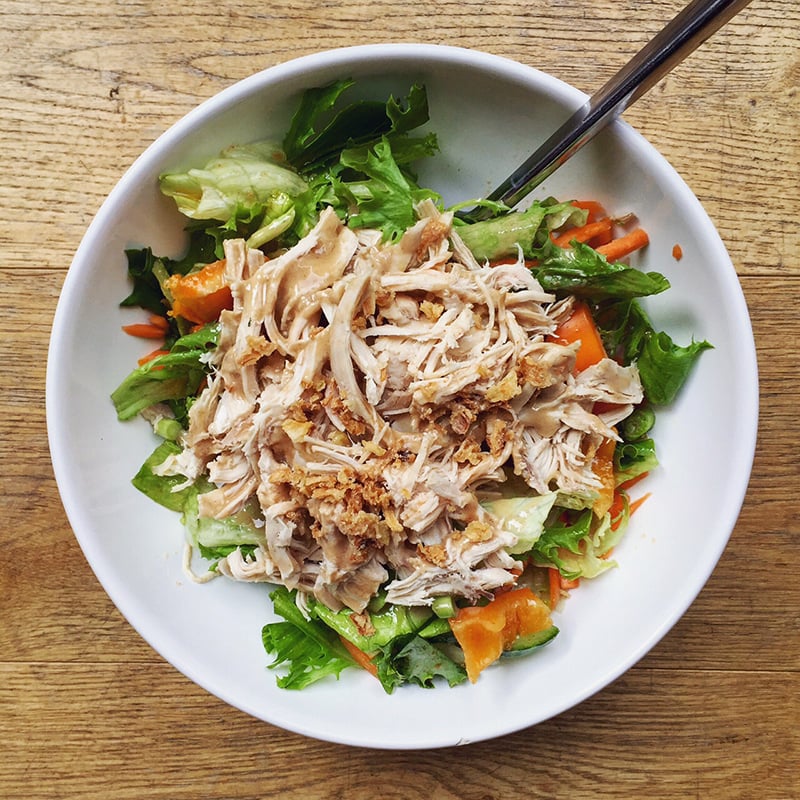