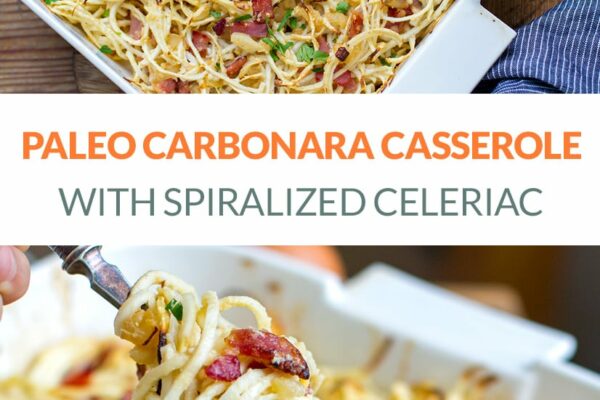 This paleo carbonara dish is made with spiralized celeriac noodles and creamy cashew sauce, then baked in the oven for that crispy, golden crust finish. It’s a hearty and delicious celeriac recipe and works perfectly as a pasta alternative. 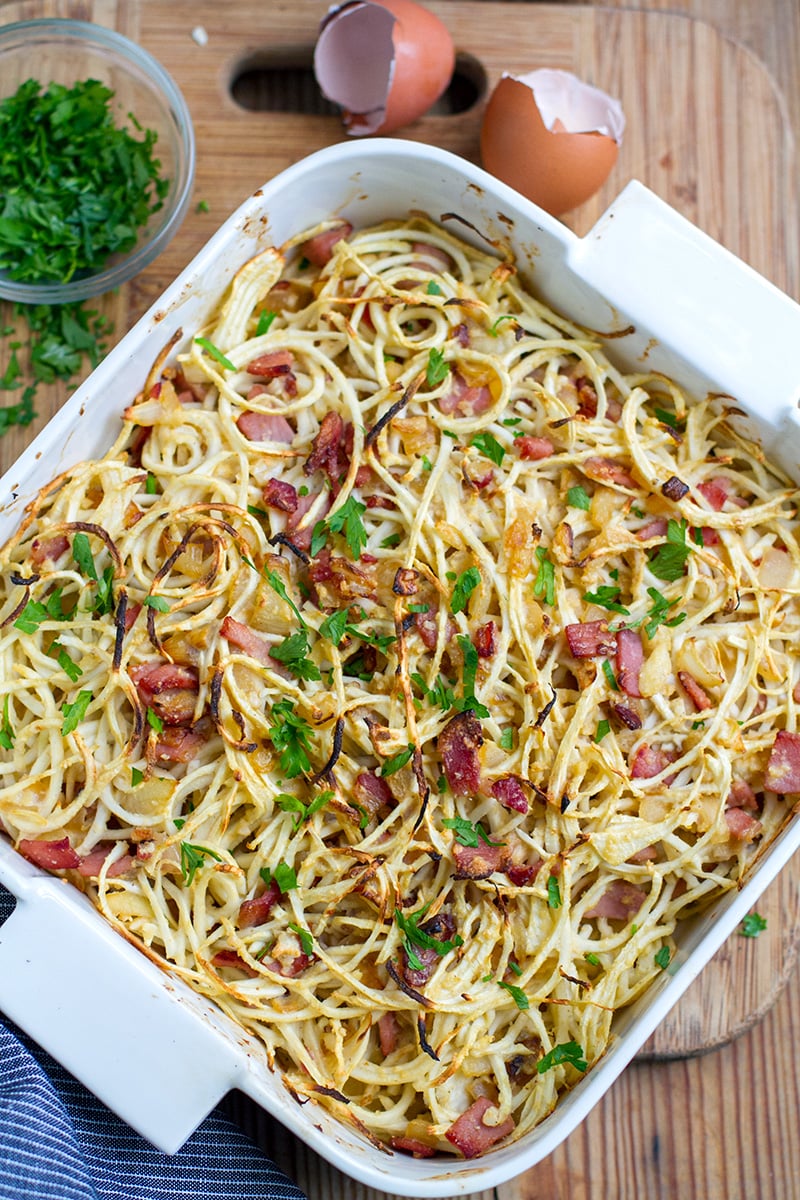 When I think of comfort food, I often imagine a hearty spaghetti carbonara. If you’ve never had it, carbonara is an Italian pasta dish from Rome made with egg, hard cheese, such as Parmesan or Pecorino, bacon, and pepper. Some versions might also contain cream but it’s actually the barely cooked egg and cheese mixed together with some pasta liquid that gives this dish all the creaminess that it needs.

I sometimes make a paleo version of carbonara using zucchini noodles, in which case I hardly cook the zucchini to keep it crunchy and al dente. For this recipe, I wanted to use a firmer root vegetable, that would retain some of its firm texture after cooking, and celeriac seemed like the best choice.

I remember seeing a recipe for spaghetti carbonara cake on Jamie Oliver’s website and it gave me an idea to make a paleo carbonara casserole. It sounded fabulous in my head and luckily it turned out great when I made it. I also found that baking this dish resulted in less mess and less effort, and looked great when presented. 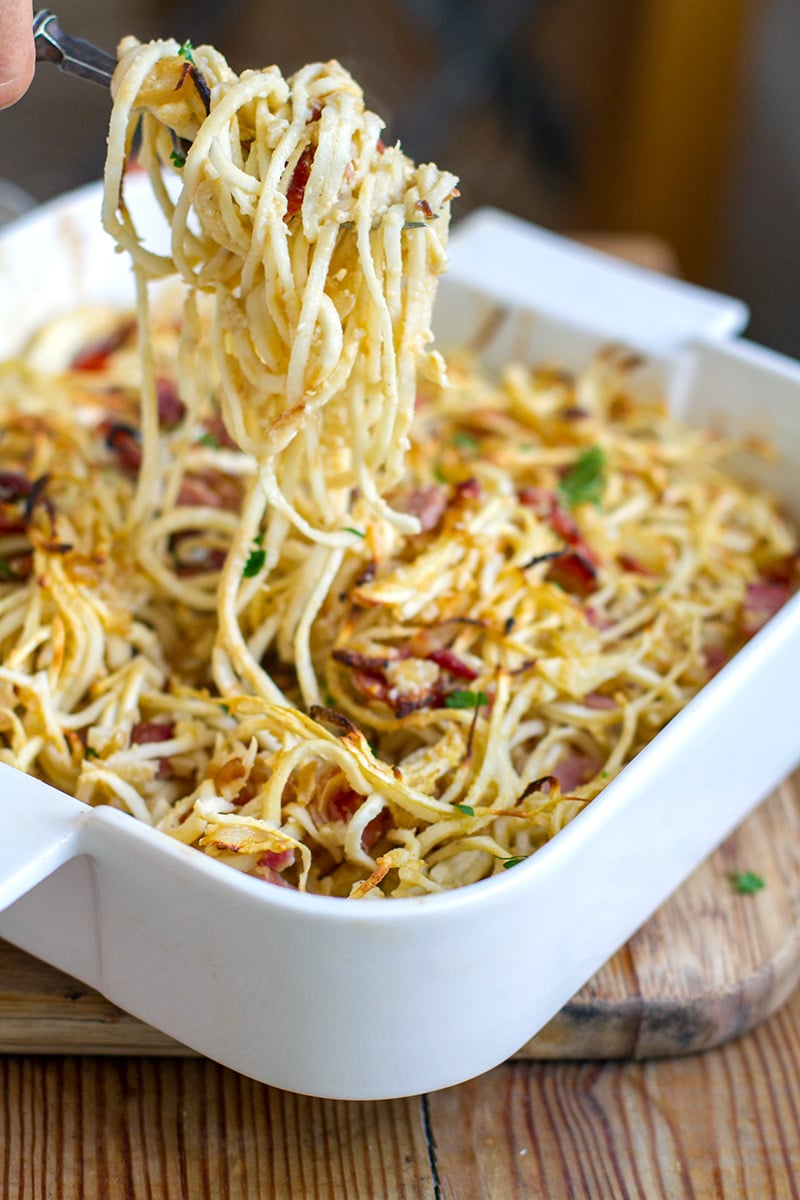 Ideally, you will need a vegetable spiralizer (I use a Paderno spiralizer) or some kind of gadget that makes ribbons or noodles out of vegetables. If you don’t own one, I highly recommend it as you can make all sorts of creative paleo dishes such as this zucchini arrabbiata with prawns or this spiralized beetroot and carrot salad with goat’s cheese. You can also make these 20 recipes using a spiralizer.

I am using celeriac to make the noodles in this recipe. Celeriac is a fantastic root vegetable with firm, slightly creamy flesh that tastes a bit like celery or fennel, but is very neutral, making it great for sauces and dressings. It’s also a great source of fibre, vitamin C, B6 and K and minerals.

HOW TO SPIRALIZE CELERIAC

In order to spiralize the celeriac successfully, you have two options:

1) Get a smaller, more elongated celeriac root so it easily fits between the blade and the handle of your spiralizer.

2) Get a really large root that you can cut into two elongated shapes.

I used a larger celeriac root, which I peeled and cut in halves. Make sure to peel off the hard skin as it’s inedible anyway (you could add it to stock). Trim off the ends so they are flat, which will help to secure the vegetable firmly between the blade and the handle. As the flesh is firmer than say zucchini, you will need to apply more pressure on the handle as you spin it.

If you don’t have celeriac, spiralized sweet potato, parsnip, or pumpkin would also work well. You could use zucchini noodles as well, but they will turn out much softer and soggier once baked.

Please note, celeriac can be eaten raw so once baked for 12 minutes it will soften slightly but should still retain some of its crunch. Don’t panic! It doesn’t mean it’s undercooked. That’s the way we want it, with some fibre and texture. 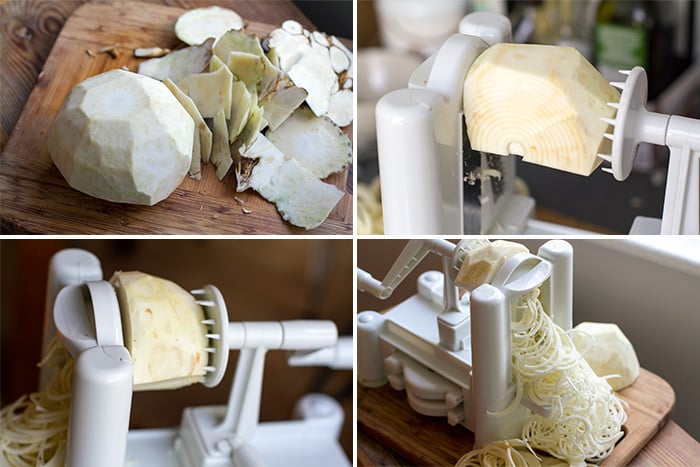 HOW TO MAKE PALEO CARBONARA WITH CELERIAC NOODLES

The rest of the recipe is pretty straightforward. As we’re not using cheese, I recreated the flavour by blending together the eggs with some almond milk, soaked cashews (for extra creaminess) and nutritional yeast flakes (for that umami cheese flavour).

You can get nutritional yeast flakes from most health food stores and online. You can also omit those and the recipe will still work fine.

Once you saute the onions and bacon and make the cashew sauce, toss the celeriac noodles with both and transfer to a baking dish. Pop in the hot oven for 12-15 minutes to crisp up and cook the egg through a little. 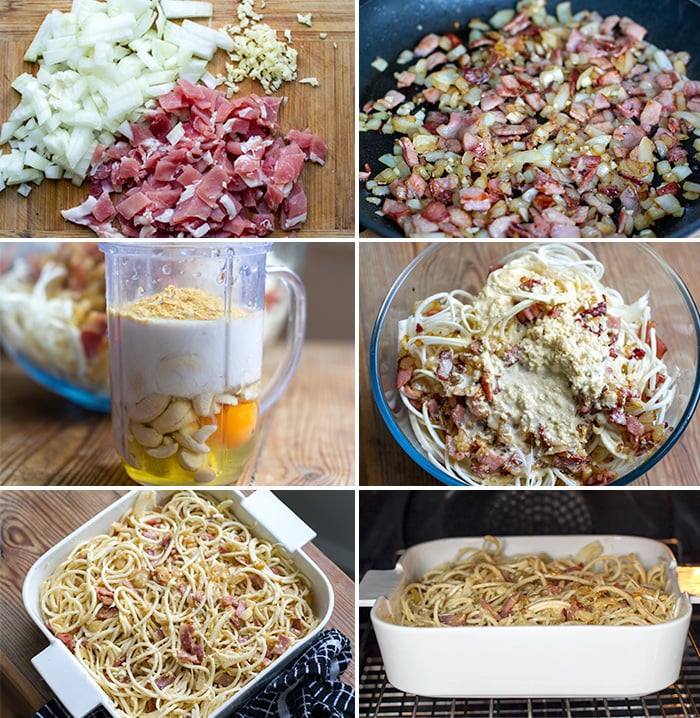 Serve with chopped parsley on top and enjoy! Let me know in the comments if you have any questions or if you’ve made it. For extra protein, feel free to grill some chicken on the side. 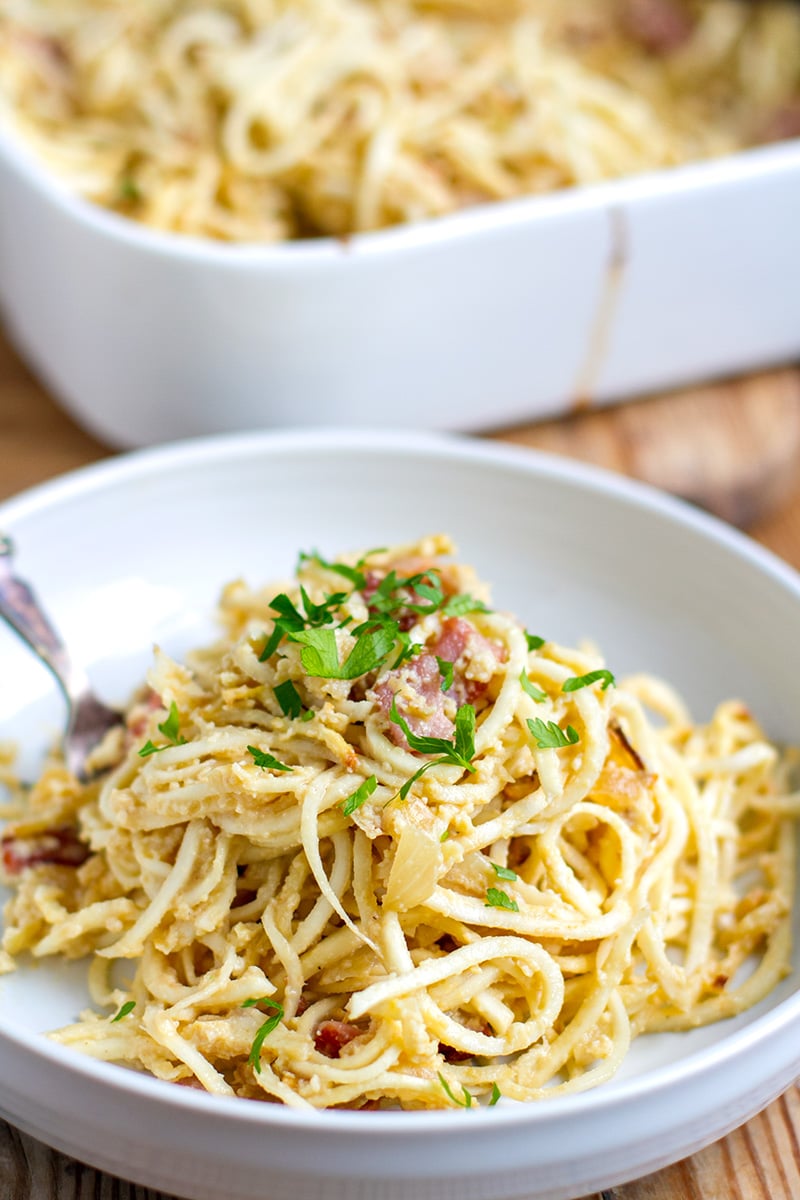 This paleo carbonara recipe is made with spiralized celeriac noodles and creamy cashew sauce, then baked in the oven for that crispy, golden crust finish.

You could use sweet potato noodles instead of celeriac in this recipe. 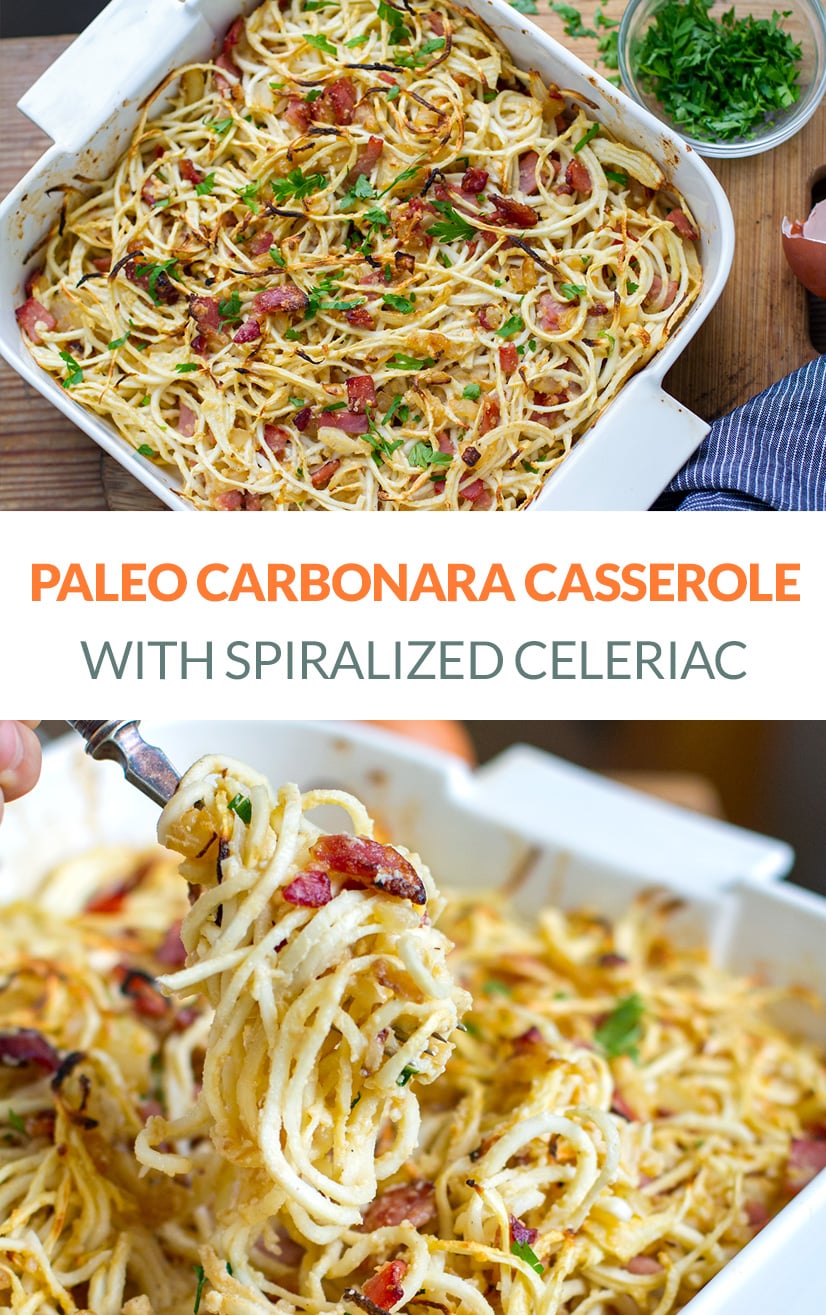