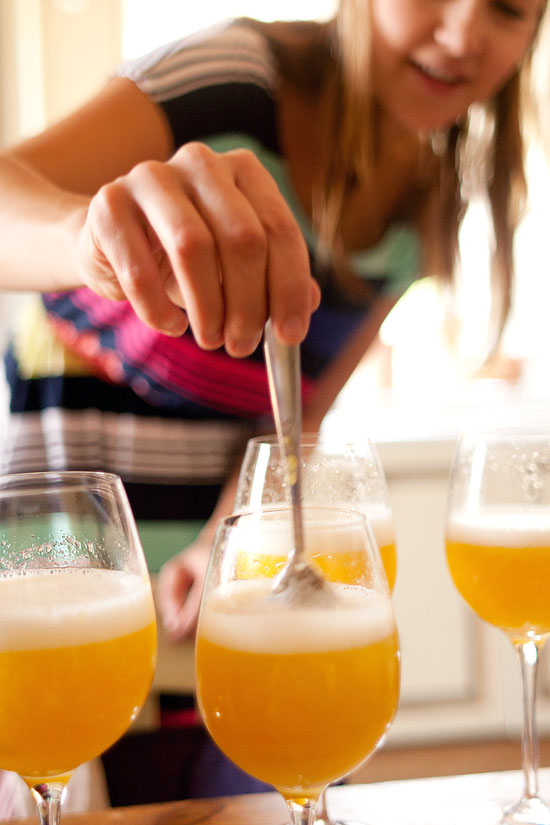 This photo was taken in Tuscany by my good friend Tim Lucas. A bunch of us spent a week in the most gorgeous Italian villa surrounded by olive groves, grape vines and cherry trees. This was our first breakfast in the sunny garden and what a better way to celebrate our first morning in the house than with a glass of freshly made Bellini.

Bellini is a long cocktail made with white peach puree and Prosecco, Italian sparkling wine. Its origins take us back to Venice, 1930s-40s, where it was invented by Giuseppe Cipriani (sounds like Pinocchio’s dad), the founder of the famous Harry’s Bar in Venice, a popular hangout of Ernst Hemmingway and Orson Welles. It later expanded to open a Harry’s Bar sibling bar in New York…thanks Wikipedia.

The drink is named after a 15th-century Italian artist Giovanni Bellini because its colour resembled that of a saint’s cape in one of his paintings. It’s still one of Italy’s and the world’s most popular cocktails and is usually served as a celebratory drink on arrival. I must say it tastes just as a good as your final departure drink of the night ;).

How to make a Bellini? It’s dead simple. Essentially you combine 2 parts Prosecco with 1 part peach puree. Add the puree to the bottom of the glass and gently pour wine over it. It will fizzle like mad so give it some time to settle down before stirring. Garnish with a berry or fresh mint if you like.

The white peach puree is the traditional ingredient but we made it with local canned yellow peaches and the colour was fantastic. You can add a little raspberry puree/juice to give it a more pinkish colour.

A little note on Prosecco, try to go for the bottles labelled spumante rather than frizzante, which is a semi-sparkling lower quality version because it undergoes only a partial second fermentation…wine geek…going to stop right there. Another thing to look out for is the sugar content. By its nature, Prosecco is quite dry and low in sugar but even then there are three levels of sweetness you need to understand. Dry prosecco contains the about 20-25 grams per litre, Extra dry add up to 12-20 grams of sugar and Brut is the driest, at 6-12 grams. Obviously, you want to go for the Brut 🙂

And that’s it! Simple yet so special.