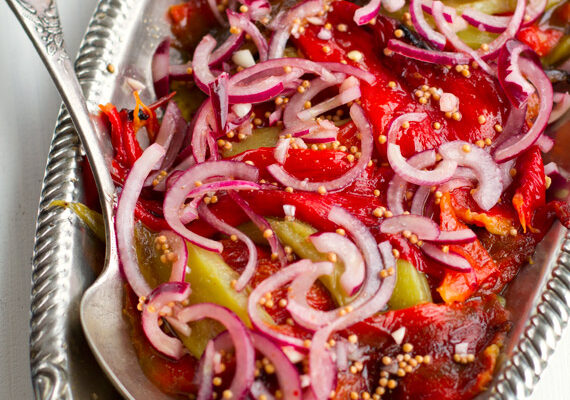 These roasted peppers with pickled onions is an adaptation of my mum’s dish. It’s always been one of my favourite side dishes (almost a condiment) so I wanted to make it myself and share with you guys. It’s paleo, gluten-free, Whole30 and vegan-friendly. 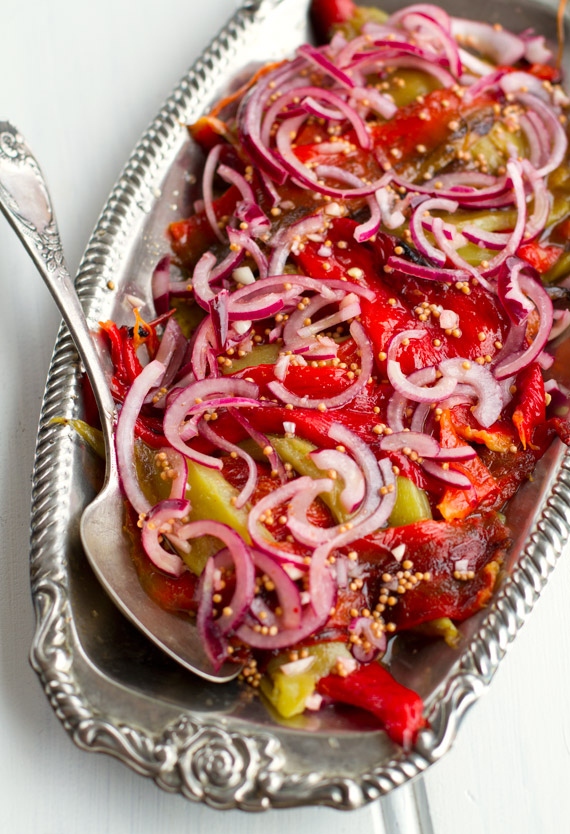 This is a dish you can make any time and enjoy over a few days. The house smells absolutely amazing when you roast the peppers, so I love doing them on a weekend afternoon.

Mum finishes the dish with olive oil sautéed onions and garlic but I quite like the more pungent taste of raw pickled onion and the crunchy texture it adds to super soft, sweet peppers.

You can use it as a side dish and a condiment with pretty much anything – steak, fish, morning eggs, Mexican lettuce cups and so on. Double the ingredients to make a large batch, which you can keep in the fridge in an air-tight container for a week.

Preheat the oven to 200 °C (390 °F). Toss whole red peppers in a little olive until lightly covered. Arrange on a foil-lined, large baking tray and place in the oven, just a little higher than middle oven shelf so that the pepper’s skin is closer to the grill element.

Roast for 50-60 minutes until the skin blackens, wrinkles and blisters on all sides and the peppers collapse. I usually turn them over halfway through. The time will depend on the size of the peppers.

Meanwhile, mix the sliced onions with the rest of the ingredients and set aside to pickle slightly.

Remove cooked peppers and let them cool down for 20 minutes before peeling the skin off. The peel should slip right off but hold the peppers by the tails as they will be quite slippery. Slice peeled peppers in half, remove the core and scrape off the seeds with a knife. Then slice into thinner strips and toss with pickled onions and all of the flavoured dressing.