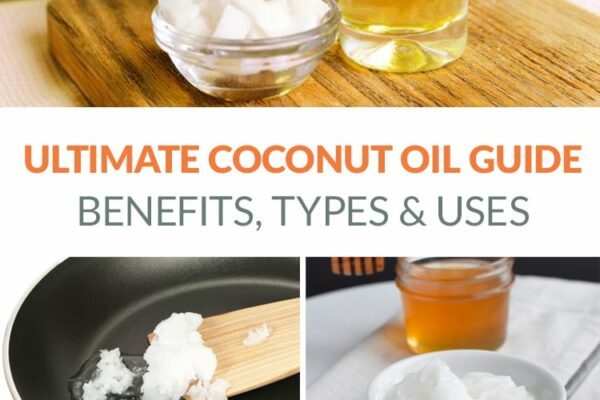 Coconut oil is often considered a bit of a ‘miracle oil’ in the nutrition world. As its popularity has grown so have the questions about its various benefits, types, uses, storage and applications. It’s a staple in paleo and keto diets but there are many more uses of coconut oil in and out of the kitchen. I have put together this useful reference guide to answer the most common questions about the coconut oil and to give you new ideas on how to use this fantastic ingredient.

So, what is coconut oil?

Coconut oil is an edible oil, that is extracted from the meat or kernel of coconuts, which is primarily used in cooking.  For many parts of the world and including places such as the Philippines, it is the most commonly used cooking oil.&

The oil, comprising of up to 95% saturated fat is said to have many health benefits, including anti-inflammatory properties, antibacterial and may aid in weight loss. Unlike other highly saturated and unsaturated fats, virgin coconut oil is made up of 70-85% medium chain fatty acids (MCFAs) – which are sometimes also referred to as medium chain triglycerides (MCT).

The saturated fat content in coconut oil makes it a good heat-stable oil for cooking and prolongs its shelf life.  Coconut oil is a very versatile oil and is also known to be used as engine fuel, an engine lubricant, skin moisturiser, soap, herbicide and as sand fly repellent!

Although for many years saturated fat has been associated with raised LDL cholesterol and an increased risk of coronary heart disease (CHD).  We know now that this is not the case, with a recent meta-analysis of 21 studies highlighted that “there is no significance for concluding that dietary saturated fat is associated with an increase of CHD or CVD” Siri-Tarino et al, 2010.

Coconut oil as an antioxidant

Cold-pressed, expeller-pressed or centrifuged are methods of extracting oil from dry or fresh coconut and can be used for both refined and unrefined varieties. All methods can create a good, healthy oil.

Expeller-pressed and cold-pressed don’t always mean ‘raw’ as sometimes these oils are heated to rather high temperatures during the extraction process, which is not a problem as coconut oil is a highly stable fat and will not go rancid. It does, however, mean that the flavour will be more coconutty. If you want more mild and delicate coconut oil, look out for a centrifuged oil which is less likely to be exposed to heat during extraction.

There are many brands and types of coconut oil and they vary in price depending on the source, production method, packaging and the marketing team. Super expensive doesn’t always mean the best, although it does often indicate the quality of ingredients and the purity. 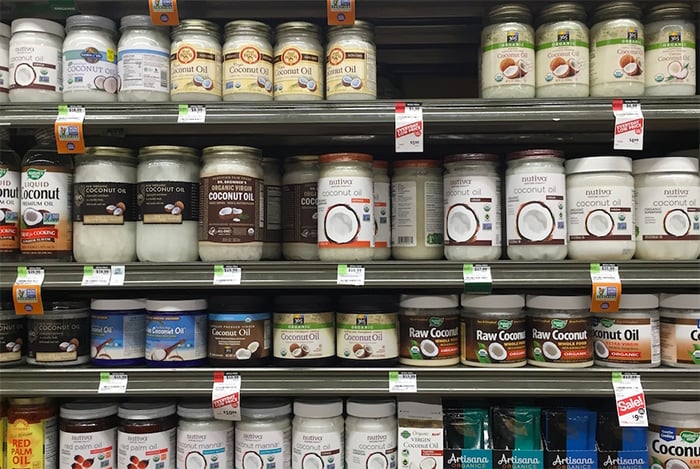 I always recommend to try a few brands and to find out as much as you can about the manufacturing process. There are many great brands out there and regardless of where you are, here are a few things to look out for:

1) Colour – white colour when it’s solid and colourless when liquid, any discolouration might mean contamination and inferior quality.
2) Aroma and flavour – virgin, unrefined coconut oil should smell and taste like coconut but should not be overpowering and strong, if it smells roasted or smokey it means it’s been exposed to a lot of heat and it might not retain as many nutrients; and if it’s odourless and neutral tasting then it’s most likely refined and treated.
3) Price – the coconut oil in most stores can get quite pricey and doesn’t always mean superior product. It’s always a good idea to buy in bulk as the oil is stable and will last for at least 12 months. You can try a few different brands and make sure you like the smell and taste before you commit to buying a big batch. You can also share the shipping costs with friends and family and save even more money.

I love Biona Coconut Oil Cuisine (refined, mild and odourless) and use it in cooking all the time. For raw/unrefined/viring coconut oil, I love coconut oil from Niulife (Australia). Outside of Australia, I tend to buy Merchant Organic’s Coconut Oil.

Coconut oil can be stored out of the fridge, away from direct sunlight, for up to two years. It will stay liquid in temperatures above 25C (75F) and will turn into butter and solid texture in lower temperatures or if refrigerated. If the oil is solid and you need to use it in a liquid form, apply low-level heat and it will transform very quickly.

How to use coconut oil?

If you have never used coconut oil before, start off slowly and just assess how your body reacts to it.  Introducing it in the diet too quickly can result in gastrointestinal upset and diarrhoea.  Most adults can usually tolerate somewhere between 2-4 tablespoons per day, but again, see how much suits you as an individual.

There are hundreds of ways you can use coconut oil – in cooking, as part of your skincare routine, as part of flu and cold treatment, or to rub on cuts and bruises. I’ve put together a few examples of how you can use it.

Coconut oil as a food

Other Uses OF COCONUT OIL

Using coconut oil in your cooking and in the home is so easy!! It is more or a case of what can’t you use it for! Coconut oil is so versatile and had hundreds of uses.