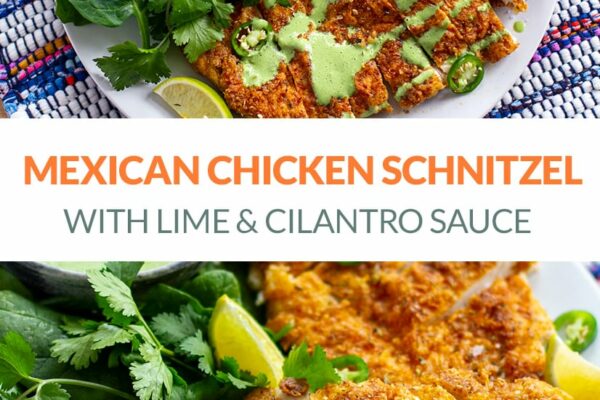 I love when a fusion of two cuisines produces unexpected yet delicious dish such as this Whole30, paleo and gluten-free chicken schnitzel with a Mexican twist. Shallow-fried till crispy and aromatic, my spiced chicken breast schnitzels are drizzled with zesty coriander, lime and garlic sauce. Yum! 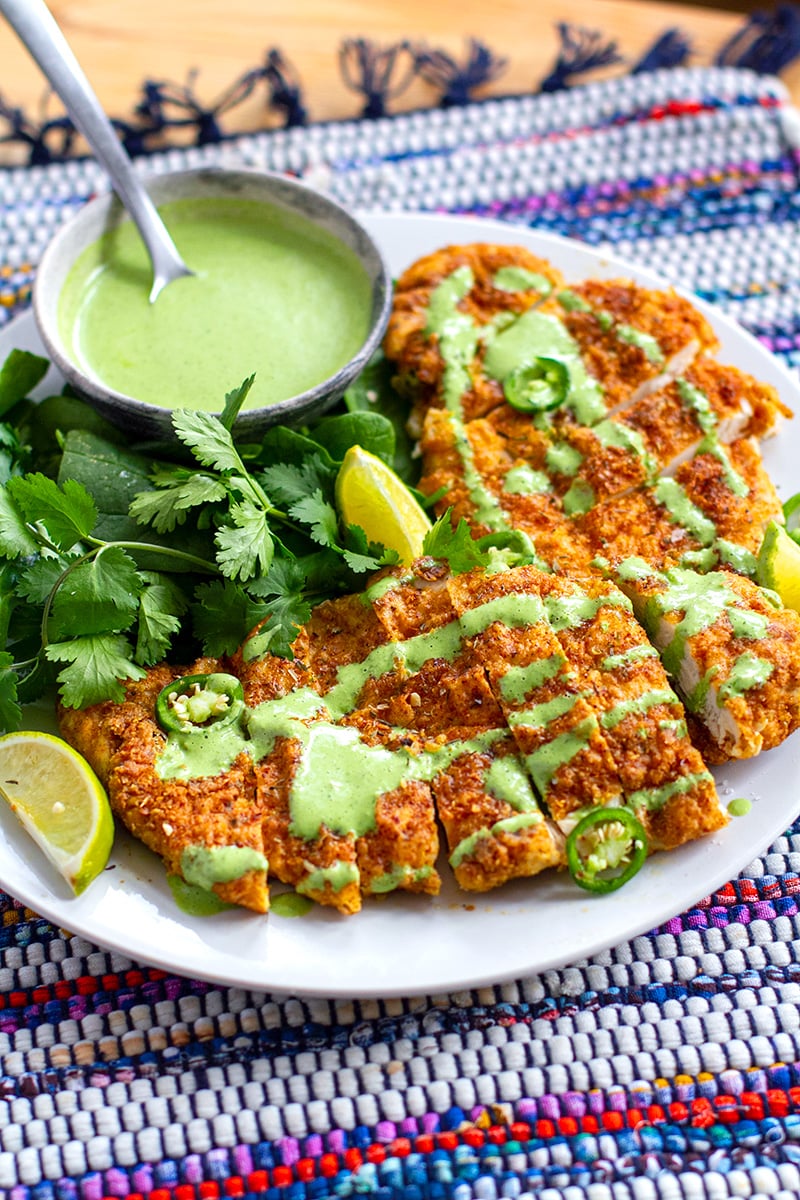 Today’s recipe was a total surprise. I didn’t plan it ahead and the idea came up to me maybe 10 minutes before I decided to make it. I wanted to use up a couple of chicken breasts I had in the fridge but I wanted something a little different to what I usually make.

I haven’t had schnitzel for a while, so I settled on the idea of pan-fried, crumbed chicken. Then, I started thinking of what to serve it with, and what I had in the fridge gave me the inspiration to make a Mexican-inspired chicken schnitzel with lovely coriander, lime sauce.

WHAT IS A CHICKEN SCHNITZEL?

If you’re not familiar with the name, a schnitzel is essentially a thin slice of meat (usually chicken or veal) fried in fat. The meat is flattened and pounded with a meat tenderizer or a rolling pin and covered in bread crumb mixture before frying. While it’s a dish associated with Austrian and German cuisines, many other countries enjoy schnitzel-like recipes (e.g. Japanese tonkatsu, Italian Milanesa etc).

Given that the meat is covered in bread and deep-fried, it’s not the healthiest of dishes but I will show you how to make a healthier chicken schnitzel using paleo-friendly, gluten-free ingredients and shallow-frying in avocado oil instead of deep-frying. 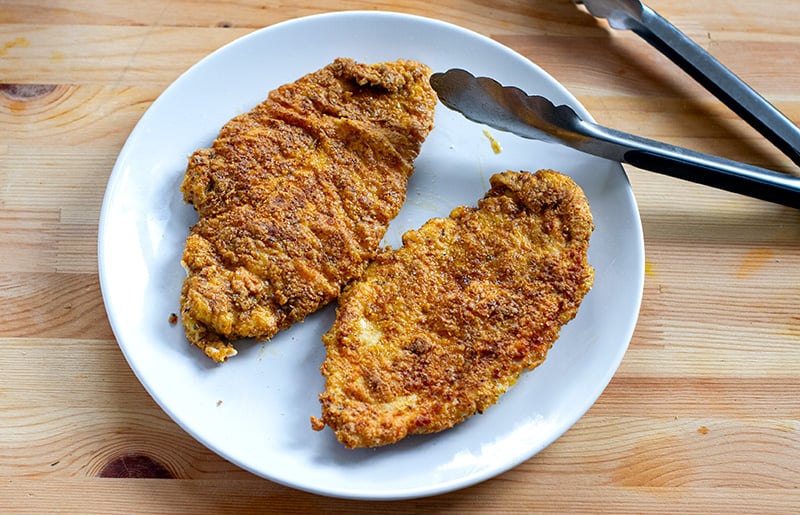 This chicken schnitzel recipe is paleo, gluten-free and Whole30-friendly. The meat is dusted in cassava flour and ground flaxseed mixture spiced with cumin, paprika, coriander seed powder and dried oregano (my favourite Mexican spices). I didn’t use any chilli in the crust mixture but the sauce has a little kick to it.

I use avocado oil for shallow-frying but you could use coconut oil or macadamia oil.

If you don’t have cassava flour, replace it with tapioca flour or arrowroot flour. Any other gluten-free flour will also work. Ground flaxseeds add a lovely crunchy texture and nutty flavour but can be replaced with ground linseed or almond meal.

You will find the full list of recipe ingredients, instructions and nutritional breakdown in the recipe below. Here is a quick video to show you how to make it.

Since I am going for a Mexican twist with this recipe, I made a zesty sauce with mayonnaise, fresh coriander (cilantro), garlic, green chilli and lime juice. I use a little almond milk to thin it out but you could also add a little orange juice, coconut milk, or any other dairy-free milk. 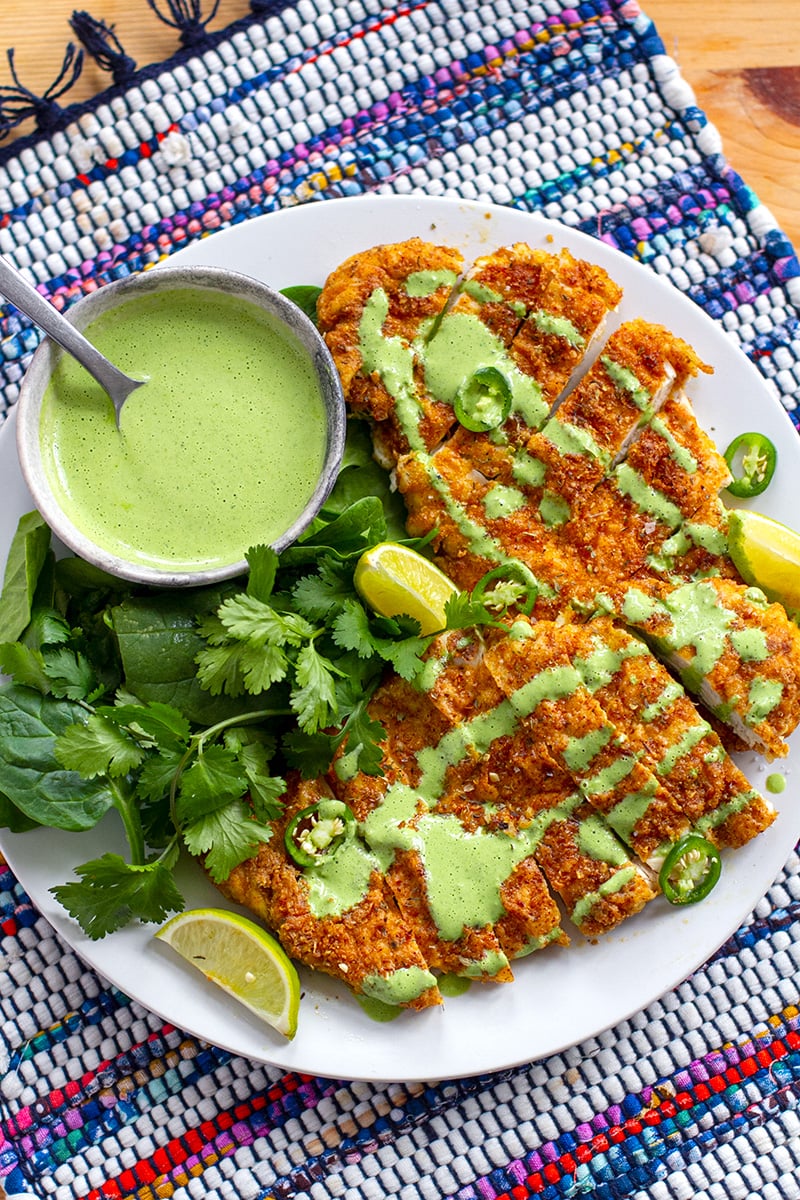 Mexican-inspired chicken schnitzel with coriander, lime and garlic sauce is a Latin American & European fusion recipe that will surprise, delight and excite your tastebuds. It’s Whole30, paleo, and gluten-free. This recipe uses 2 chicken breasts but you can use 4 breasts as there will be enough sauce and four mixture.

A rolling pin or a meat tenderizer

For the breading
2 eggs, whisked

1 teaspoon garlic powder (can be omitted)

For the sauce
2 tablespoons mayonnaise

A pinch of salt

2 tablespoons of almond milk or another dairy-free milk