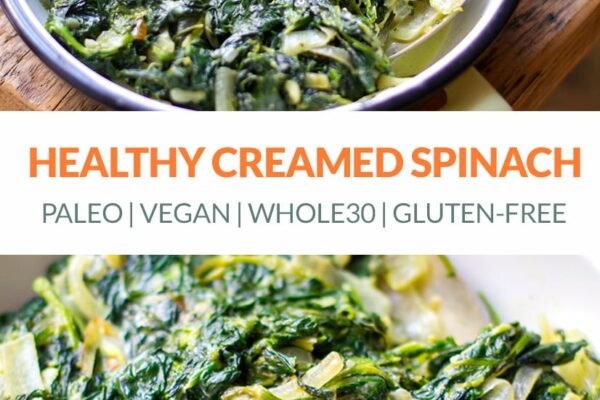 Made from frozen, this healthy paleo and vegan creamed spinach is made without dairy and makes for a perfect side dish or a plant-based main with some rice or quinoa. With a touch of curry and coconut, this spinach recipe has an Indian twist that you will love. It’s also Whole30 and gluten-free. 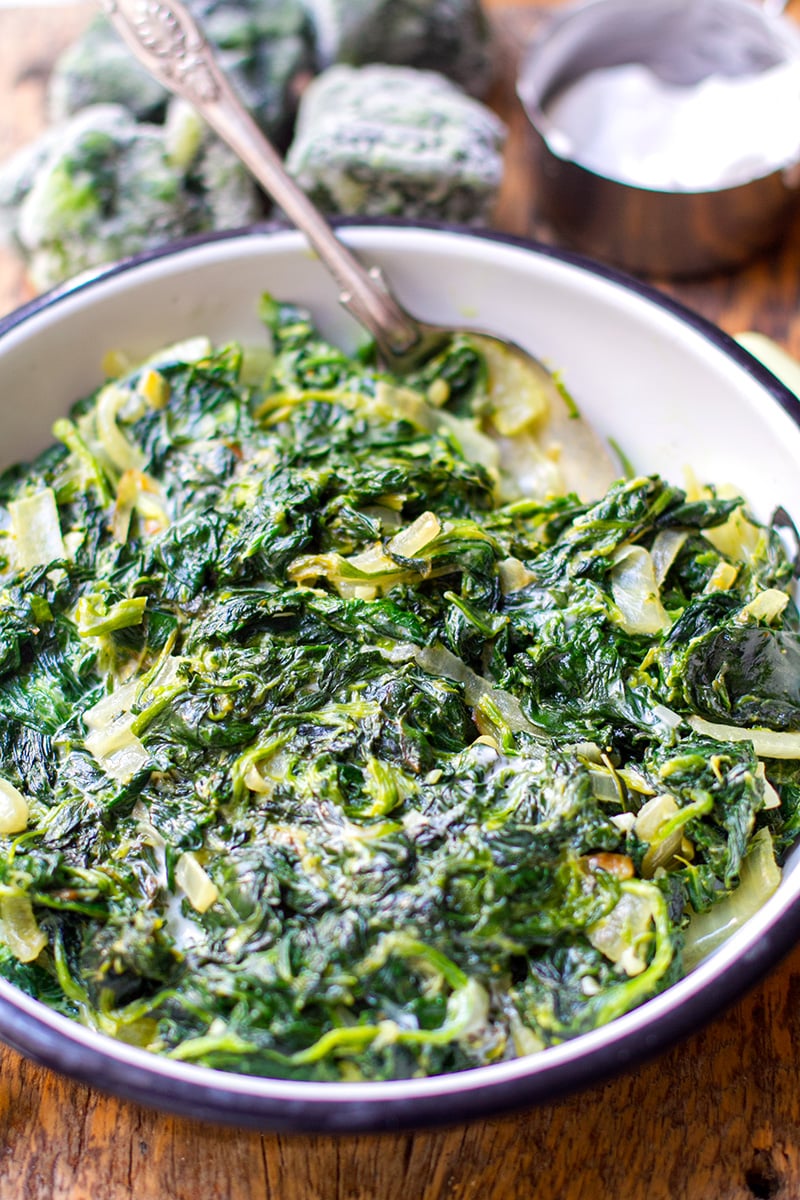 Creamed spinach is something you would often find in a side dish section of many restaurant menus. Enveloped in luxuriously rich cream, this dish is a sure winner when it comes to pairing protein and vegetables. It’s also a staple at a Christmas and Thanksgiving table!

However, if you don’t do dairy or you simply want a lighter, healthier creamed spinach version, it’s not as easy to find. Good thing you can make your own dairy-free creamed spinach at home and this recipe with an Indian twist will become a favourite. I promise!

One of the reasons I love this dish so much is because spinach is so damn nutritious! This powerhouse leafy green is very high in vitamins A, K, C and folic acid, as well as iron and magnesium.

I am also using onions and garlic in this dish which are great sources of prebiotics (a.k.a fuel for your good gut bacteria); and coconut cream contains beneficial lauric acid, a medium-chain fatty acid that’s easily absorbed and used by the body for energy. Plus, the fat in the coconut oil will help your body to absorb all those vitamins in the spinach.

This recipe is dairy-free and low-carb and is suitable to paleo, vegan, Whole30 and gluten-free diets. For AIP, omit the curry powder and instead add a little turmeric and nutmeg powders.

Check out the full nutritional breakdown for this dish below the recipe.

In this recipe, I am using frozen spinach which has been defrosted, so it’s a fantastic dish to make on the budget. Frozen spinach is equally nutritious but if you want to use fresh spinach in this recipe, you will need to equal the amount in fresh leaves.

On average, baby spinach comes in 200 g / 7-8 oz bags, so you will need about 400 g or two bags of baby spinach to make a large batch of creamed spinach enough for say 4 people. It might seem like a lot of spinach but it will wilt down during cooking and reduce in size dramatically. Of course, you can make a smaller batch if you like.

If you’re using English spinach, I think two bunches should suffice. Make sure to clean the leaves thoroughly and remove the harder stems (you can use those in a soup, stock or smoothies). 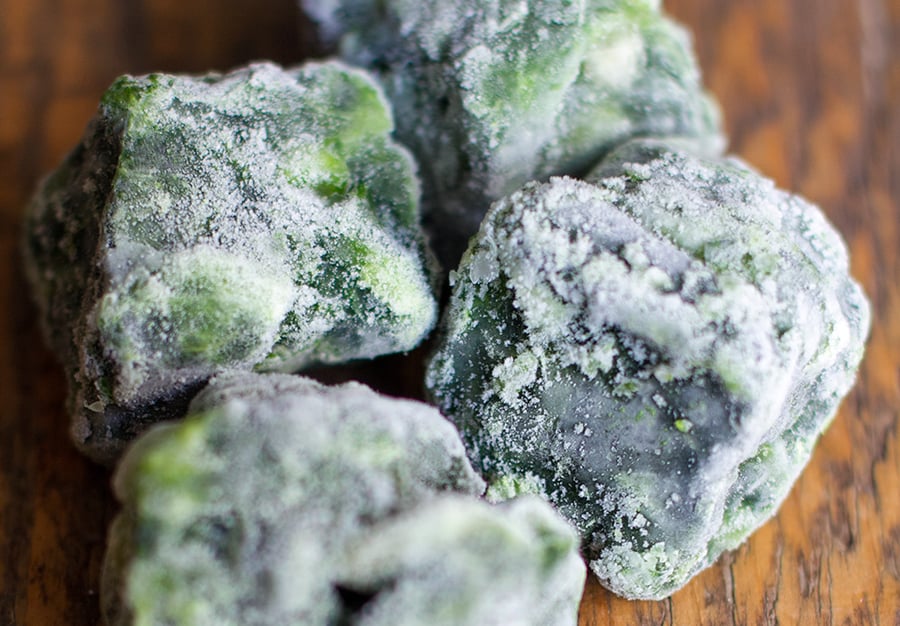 I wanted to create creamy, rich spinach but without using regular dairy cream. The coconut cream was the obvious choice and when I started thinking about the flavour, I decided to spice the spinach with some mild curry powder, which gave this dish a lovely India twist.

Coconut cream tip: place a standard 400 ml can of full-fat coconut milk in the fridge for at least one to two hours or longer if possible. The cream will separate from the watery liquid and gather at the top of the can. Open the can (standing up the same way up as it was in the fridge) and scoop out the thickened cream from the top. Reserve the rest of the liquid for a smoothie.
You can defrost frozen spinach overnight in the fridge or place it in a bowl with hot water for 30 minutes to an hour. Once defrosted, squeeze the spinach with your hands to discard excess liquid.

The recipe is super simple! You saute the onions and garlic, add the spinach and spices, let it all wilt down and then stir in the coconut cream and lemon juice. That’s it! Besides the spinach preparation, it’s really really fast. 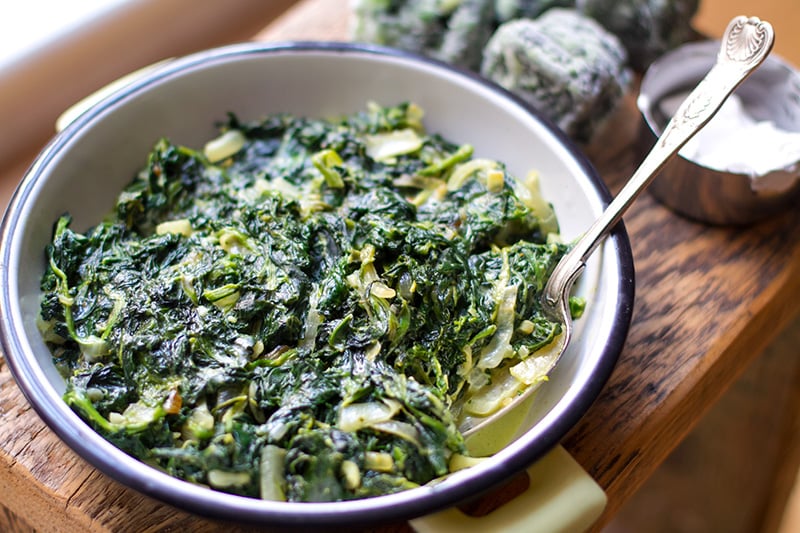 WHAT TO SERVE WITH CREAMED SPINACH?

Depending on your diet, this healthy creamed spinach can be served as a side or as a main. It goes well with grilled meat, chicken or fish or can be served alongside quinoa, rice or other plant-based mains.

As it has an Indian twist, this dish will pair well with rice biryani dishes, tandoori grilled protein or any curry dishes. It’s also really good with eggs in the morning.

This paleo and vegan creamed spinach is made from frozen with the additional of sweet onions, curry and coconut cream and has an Indian twist to it. It’s great as a side dish or as the main served with some rice or quinoa.

If using fresh spinach, you will need somewhere between 300-400 g / 12 oz. (or two bags) of baby spinach or two bunches of English spinach. 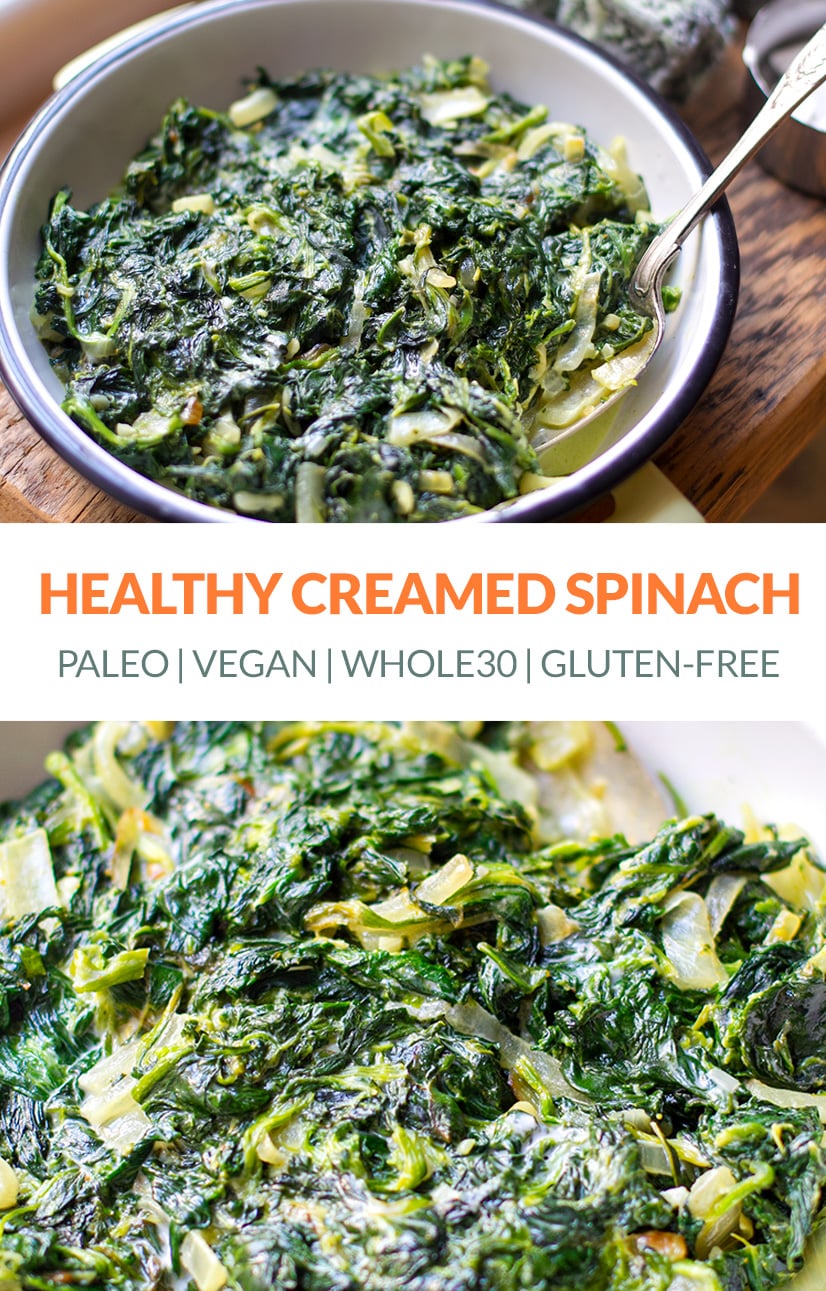