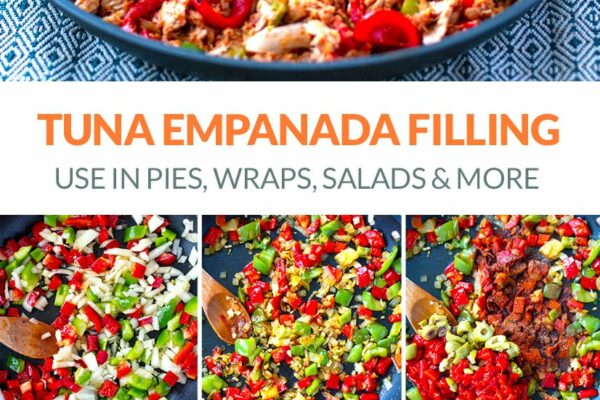 Have you ever had tuna empanada? While it’s more known for its short-cut pastry parcel, I’ve always enjoyed them because of the tasty, tomato-y, peppery fish filling. Today, I want to show you how to make the tuna, peppers and tomato mix that goes into the Spanish empanada pies. What’s good about this dish s that it’s super versatile, great for meal prep and can be used in dozens of ways. If you’re looking for some new, healthy canned tuna recipes, make sure to bookmark this one!

If you ever travel through Spain or Latin America, you will undoubtedly come across a few empanada bakeries. Empanada is a baked or fried turnover (like a parcel) consisting of pastry and filling and there are many variations of this moreish snack around the world.

The fillings range from beef, cheese, corn, chicken, fish and vegetables but my favourite has always been tuna empanada from Spain. It’s a bit of a Galician staple, in which tuna is mixed with braised onions, peppers and tomatoes. It’s tasty, savoury, a little sweet with a touch of acidity from tomatoes. I have always thought that this empanada filling would be a great way to use up canned tuna and that it could be used in so many other dishes.

Canned tuna is nutritious and affordable; it’s high in protein, essential fatty acids, minerals and vitamins. Make sure to get responsibly sourced tuna. Other tinned fish like salmon and sardines could also be used in this recipe.

WAYS TO USE UP TUNA EMPANADA FILLING

The most obvious would be to make empanadas themselves. There are a few ways you could make empanadas: as parcels or turnovers with short-cut pastry or simple filo pastry from the shop or as a pie. This pic below is of Galician style tuna empanadas from Spanish Sabores blog. This recipe from Taste.com.au shows you how to make it with store-bought pastry. 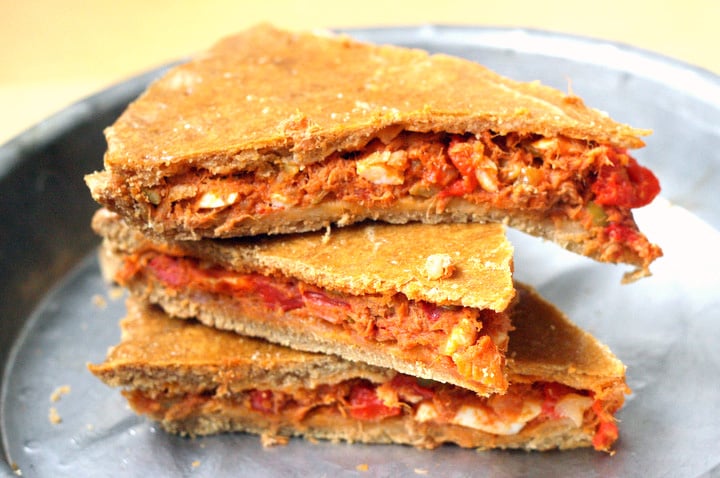 But, what if you don’t eat pies or pastry? Don’t worry! Tuna filling has many uses. 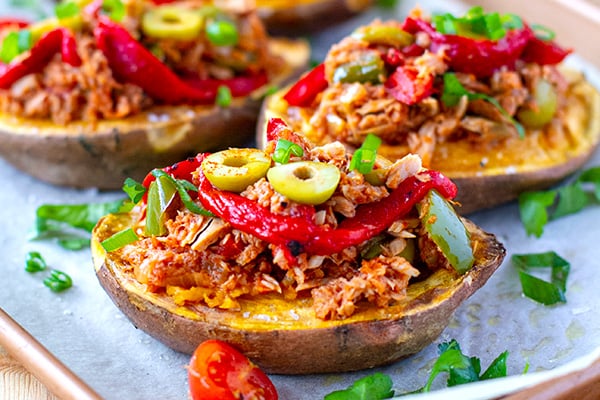 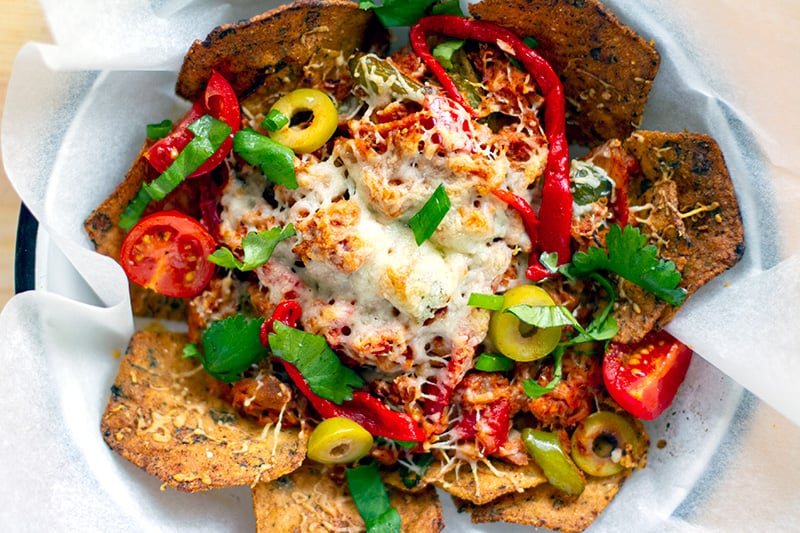 Okay, you will find the full recipe, instructions, nutritional breakdown further below but here are some step-by-step pictures to help you along.

Step 1. Dice all the veggies. White or red onions could be used. If you don’t have both red and green peppers, it’s okay to use one colour. 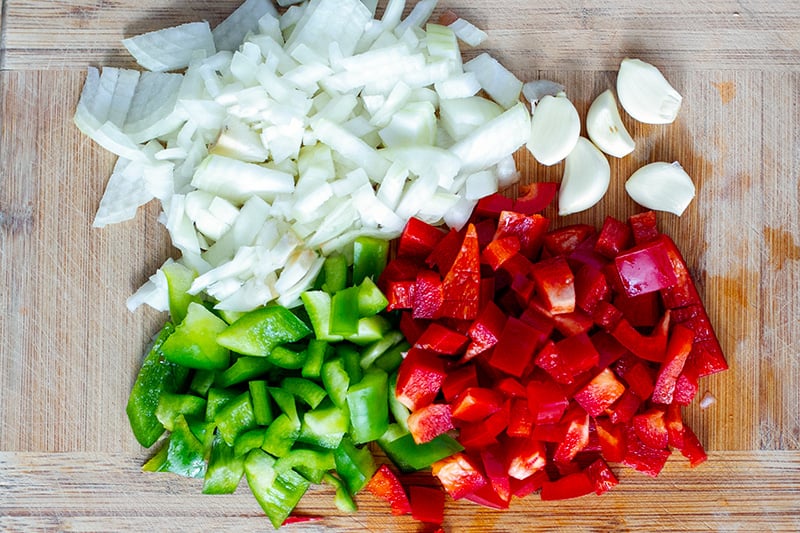 Step 2. The next two ingredients are not always in the filling but I think they make it extra special and I love when they are used in the Spanish versions. Green olives (which is very Spanish) and roasted or grilled red peppers. You can get these in a jar, canned or pickled, and they are available in most supermarkets. Look for them in the same section as gherkins or other pickles. They add extra sweetness and acidity but aren’t essential if you don’t have any. Dice it all up! 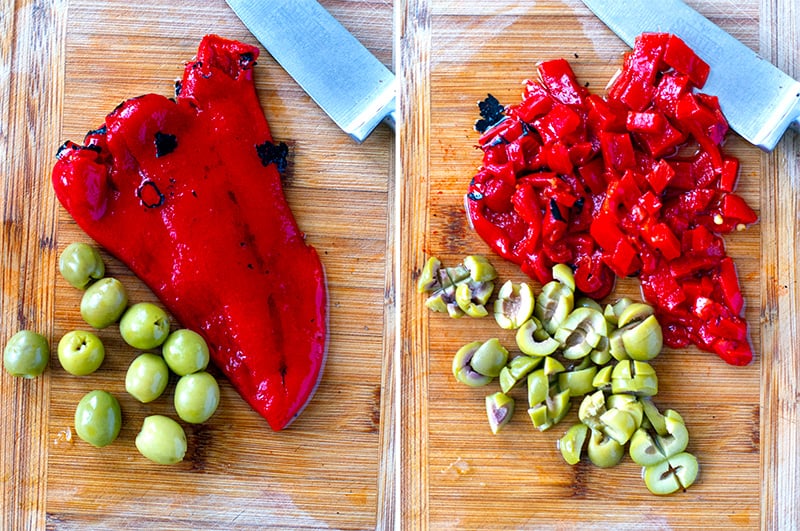 Step 3. The key to a good tuna empanada filling is to saute the onions, peppers and garlic in plenty of olive oil until very soft and slightly caramelised. This gives a lot of sweetness to the vegetables and enhances their flavours. Don’t rush this step! Once softened, add the spices and tomatoes and finally the tuna.

Step 4. Once all mixed, cook the tuna in the sauce for a little bit longer and finish it with a few slices of roasted peppers and olives.

Store this Spanish tuna filling in an airtight container for 4-5 days. It can be eaten cold or reheated. You can add a little more water tomato passata when reheating if you want a little more liquid. 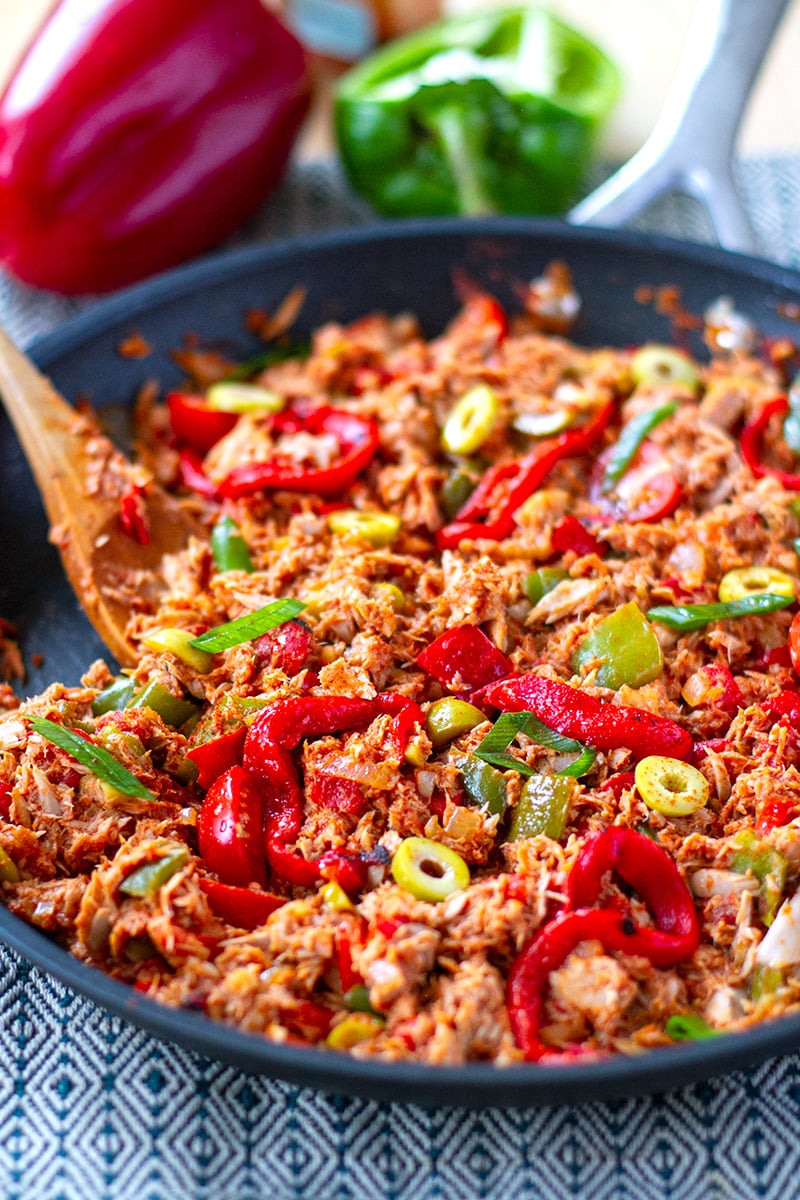 Versatile and perfect for meal prep, this tuna empanada filling is made with sauteed onions and sweet peppers, tomatoes, garlic and canned tuna (can also be salmon). This filling can be used in an empanada pastry or a pie, as a stuffing for baked potatoes, in pasta sauce, salads, sandwiches, wraps, as a topping on tortilla chips, in nachos and more.

1 roasted or grilled red pepper, diced (canned like these)

Roasted or grilled red peppers are often canned or pickled in juice and sold in a jar. You can buy them in most supermarkets and the leftovers can be used in salads, soups, dips and sauces.